How did they do the sea floor in Exodus: Gods and Kings?

The sea floor rendering in "Exodus: Gods and Kings" was really amazing: 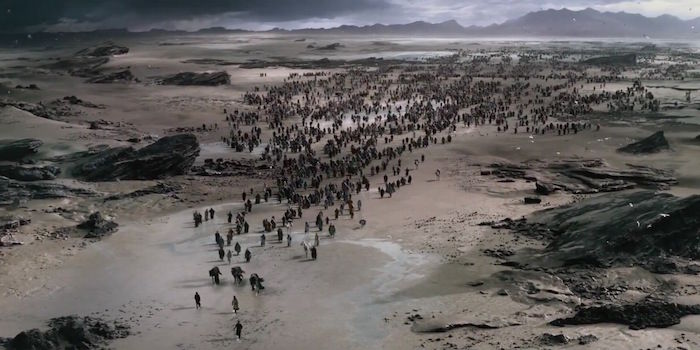 How did they do that 3D rendering? Where did they get the models? What sofware? What was the studio that did it?

MPC studios, along with Scanline VFX was the company responsible for creating the visual effects

the Red Sea remains one of the most iconic scenes in the film. Scott & his CGI team had the daunting task of living up to expectations. The team meticulously created this famous biblical miracle under visual effects supervisor Jessica Norman. The scene was filmed at a beach on Fuerteventura, one of the Canary Islands off the northwest coast of Africa. MPC studios, along with Scanline VFX, used a wave animation rig to create the catastrophic ocean waves. Scanline VFX used their in-house fluid effects software – Flowline – to make this scene a cinematic delight. Close-ups of the actual beach water were used to film people fleeing across the sea bed. Except Christian Bale, Joel Edgerton & 30-40 people in the background, everything else including the water heading toward infinity, horses, and the 40,000 people crossing the red sea were computer-generated.

Not the answer you're looking for? Browse other questions tagged effects exodus-gods-and-kings .