The 1999 film Fight Club stars Edward Norton as an average "everyman" character, a random nobody, that develops an all around better secondary personality called Tyler Durden. Edward's character is never directly addressed by his real name, and even in the credits is only credited as "The Narrator". In the movie he gave fake names in the Anonymous Support Groups he visited, and even Marla thought his name was Tyler.

Of course, he had to have a real name, in-universe. Before the events of the movie, he flies constantly. He has a real job. A car, a condo, insurance. Most people would have that under their real name.

So what is the character's name? Are there any hints?

There are no blatant reference's the Narrator's name in the movie. The source material, the 1996 novel of the same name, has the main character refer to himself in the third person as "Joe's arbitrary organ" a few times, but this could be a red-herring as it may refer to an article the character read. Of course both the article being about a Joe and the character being named Joe is possible, but not confirmed. The Author has stated that even he doesn't know his real name. It does have a scene where the character shows Marla "proof" that he isn't Tyler, via his driver's license. It does not have Tyler's name, but considering the Narrator is an unreliable narrator, there is always the doubt his license is also fake (or was replaced by the Tyler persona).

The movie on the other hand does not have Joe. It has Jack, as in "Jack's Smirking Revenge":

The Narrator uses "Jack's arbitrary organ" phrasing multiple times. Most people will rely on just that to call the character Jack, but others point out that the Narrator reads a Reader's Digest article about the first person view of internal organs, called "I Am Jack's ____". (FYI: The articles are real, and old, 1970s old. The series was Joe and Jill, not Jack like in the movie.)

Aside from the article reference, the movie script definitively names the character as "Jack".

The change from the script to the credits is really a stylistic approach, as the character's real name is indifferent to the moral of the story, that "Jack" is an everyman. His name is not important to the story.

But again, the Narrator must have a given name in-universe, as he has lead a "normal" life up until he develops Dissociative Identity Disorder.

In the movie there is only one reliable hint of the Narrator's name. A blink and you miss it view of his paycheck. (Will update with screen shot when possible) The prop was later auctioned off, with Certificate of Authenticity. Screen used prop of The Narrator's real name, Jack Moore: 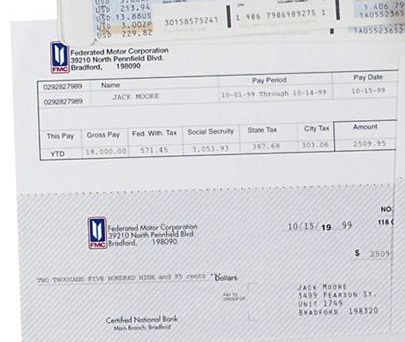 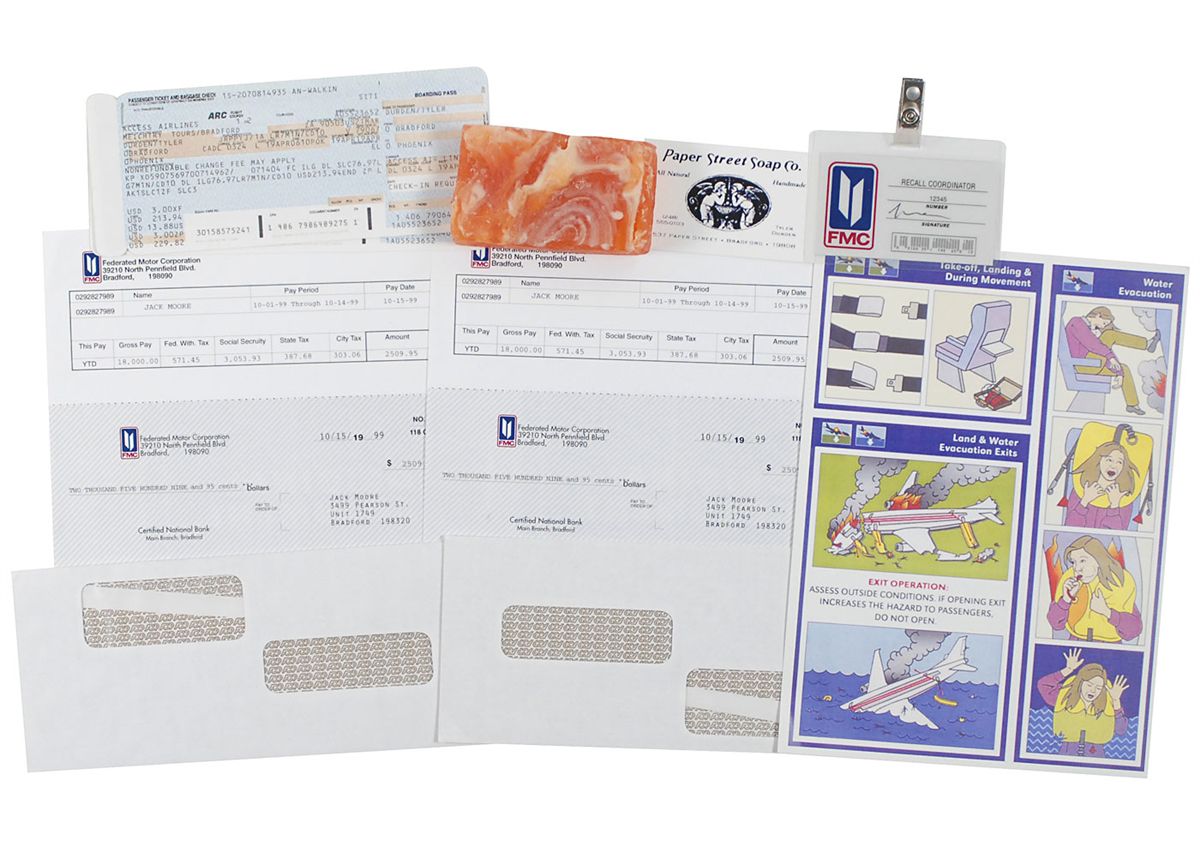 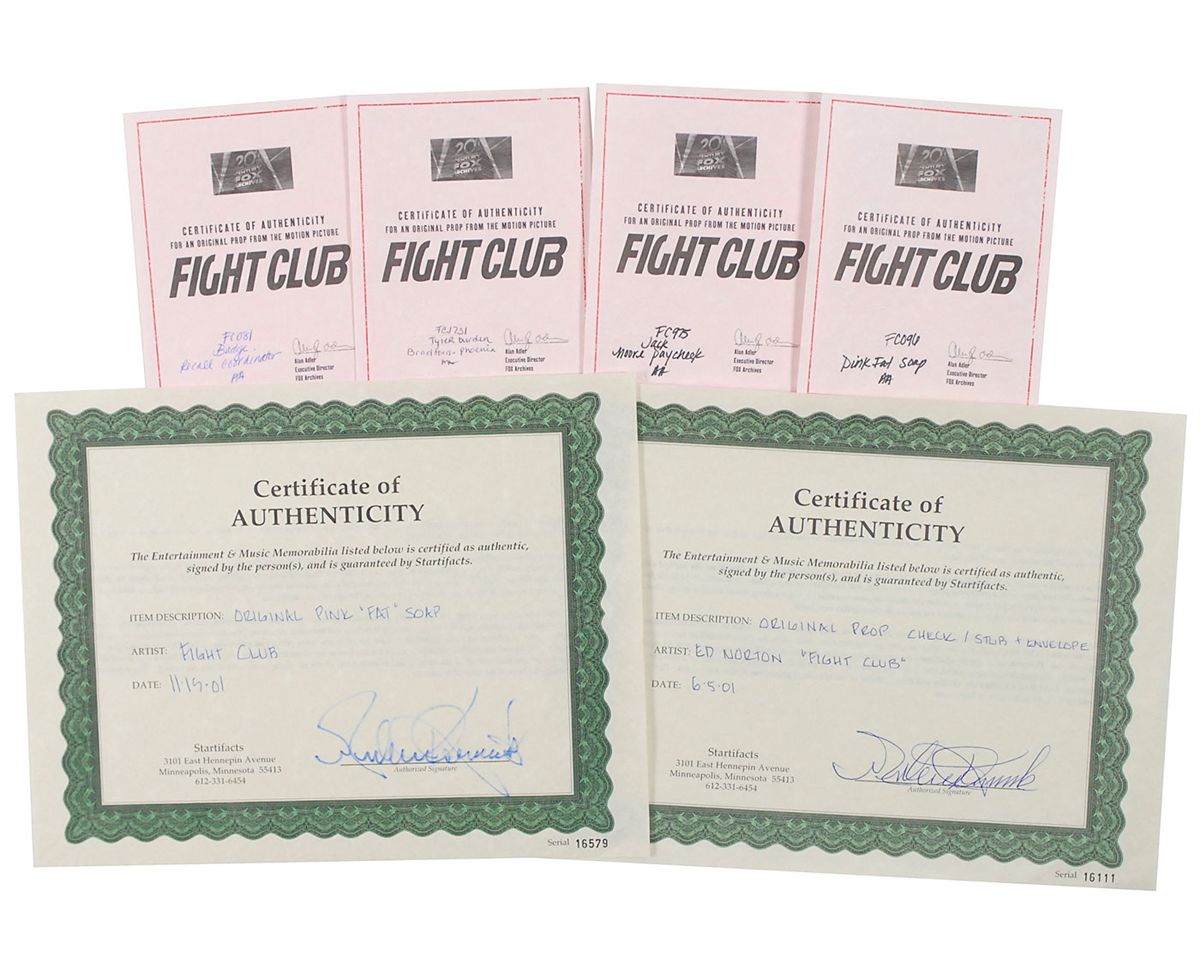 I am Jack's 38 dollar per hour desk job.

Not the answer you're looking for? Browse other questions tagged character fight-club .

39
What is the significance of the narrator's fight and Tyler Durden's subsequent actions?
31
What is the meaning of the penguin in Fight Club?
14
What is M's real name?
6
Fight club ending question
12
What was Daniel Craig's character's name?
10
What happens to the Narrator's baggage in the movie Fight Club?
7
In Fight Club, when Ed Norton first confronts Marla, why doesn't he tell her about his insomnia?
11
What is Jack Sparrow's real name?
2
Who started the other fight club chapter?
5
What was Jackie Chan's character's full name in the Rush Hour movies?