I'm looking for an American movie from the 1970s - probably mid to late. It's set at a TV news-station (or possibly, the news-section of a TV-station) in San Diego. It's about the conflict between a disillusioned male news-anchor and his relatively new boss... the anchor wants to report news, the boss wants to sell sensation. There is also a new female anchor, just starting to earn her spurs. The back-drop is that police has found some porn-pictures of a young teenaged girl.

Major spoilers ahead - I remember pretty much everything but the title!

The male anchor has a source in the Prosecutor's Office - a female, maybe a DA, and gets some tips. He notices (in a blank surface) that his boss is listening in on the phone-call on another extension. I think one of the tips is that the abuse had happen on some field-trip, and when this is reported, the anchor's daughter (or some other relative - maybe a niece) is able to identify the victim. The anchor says he knows the identity at work, but he - despite his boss's urging - refuses to interview the girl.

Instead the boss sends the young female anchor, and she interviews the girl right outside of the school - and in front of the whole student body. The girl sobbingly claims it was just "art-photos". Even though the girl's face is hidden when the interview airs, the whole school now knows. The news-anchor is very angry about the interview, and isn't calmed by the boss excusing it as the female anchor being inexperienced.

Later the young girl gets letters and/or phone-calls from perverts, and attempts to commit suicide. The news-anchor hears the dispatcher on a scanner in the news-room, and recognizes the address. He calls his DA-source, and she tells him the girl is in the hospital and will be alright - but apart from this, she is rather livid about the reporting.

Later the DA calls the news-anchor with a scoop - the police have discovered it's all part of a porn-ring, and is raiding the millionaire who's behind it. The anchor respectfully declines, and ask her to take it to another station. Again he notices his boss listening in.

For some reason, there's a final fight between the anchor and his boss - and the anchor is fired and/or he quits (the boss fires him, as he tells the boss he's quitting). The boss follows him to the reception, where they discuss their different views about reporting news vs. selling sensation. At the end the boss assure him that the female anchor is more than ready to take over, so he won't be missed. Just then, the evening news comes on at a TV in the reception.

The female-anchor reports about the police raiding the millionaire porn-ring leader, one Juan R. Cabrio at his residence at Point Luma (probably not spelling this right...); when the people in the reception room start laughing. The boss asks "what so funny?" and the news-anchor replies: "They recognize the name". "Huh?" "Juan R. Cabrio - the millionaire porn-ring leader... They know him better as the founder of San Diego... they picnic around his monument, out at Point Luma!"

The boss shouts that he won't get away with this, and he'll never work again, to which the news-anchor replies: "No you won't tell, because then you'll have to explain why neither you nor your new golden-girl know anything about the city's history... then you'll have to admit your unethical way of monitoring phone-calls... and finally, you'll have to admit that you don't confirm your sources." (not an exact quote, but close) Then the news-anchor walks out the door. And just as he does, a news-van from a different station screeches to a halt, and a reporter and a camera-man storm in to interview the boss about the broadcast.

So, does this seems familiar to anybody?

Edit: Corrected "San Francisco" to "San Diego" in title and body, in case anybody goes searching. Left other of my errors as they were. Else look at Walt's excellent answer.

News At Eleven from 1986 with Martin Sheen.

Frank Kenley faces a number of moral dilemmas when dealing with the latest scandal: a teacher accused of sexually assaulting a student. While trying to keep the case in court, rather than trying the teacher on television, an underhanded producer takes the matter out of his hands and succumbs to a Hearst-esque style of "yellow journalism".

You remembered almost everything correctly except for a few inaccuracies (it's Juan R. Cabrillo and San Diego). A very good and detailed question. Here's the poster (can't find any clips at the moment): 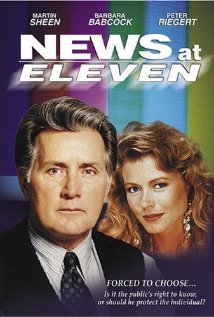