How did Korath know that Quill had taken the Infinity stone?

In this scene from Guardians of the Galaxy:

How does Korath show up exactly when Quill is about to take the Infinity stone? How does he know Quill is there?

Space is an extremely large place and the planet appears to be completely abandoned along with the Infinity Stone.

More importantly, how does Korath even know about the Infinity stone? If he does know about it and he also knows it is laying there why hasn't he used it's power?

How does he know Quill is there?

He doesn't. That's why he starts barking questions about who are you/how did you know about this place.

More importantly, how does Korath even know about the Infinity stone?

He doesn't know about the Stone inside, just that he is supposed to retrieve it.

If he does know about it and he also knows it is laying there why hasn't he used it's power?

The entire reason that Korath, Star Lord, and Yondu know about it is because it's a well known powerful artifact. The Collector tells Gamora in the "Guardians of the Galaxy Prequel Infinite Comic" (set between Thor Dark World and GOTG) where it is located. Gamora is only looking for the Orb because Ronan is (and she doesn't want him to have it), and Ronan is because he's following Thanos' order. (I still not sure who the broker was collecting it for). 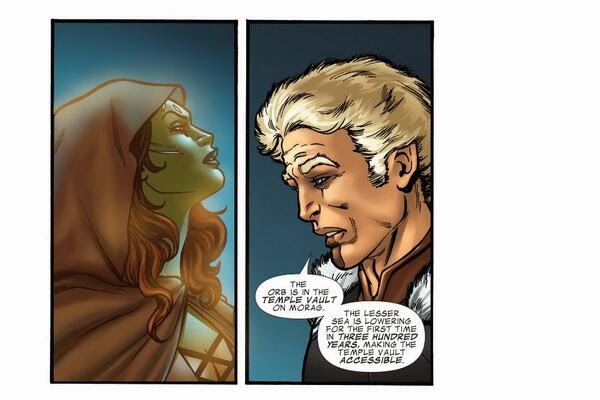 The planet the Orb is on, Morag, is normally covered in a deep ocean, but every 300 years the water retreats enough that the Temple is accessible.

Korath and Star Lord only meet by chance, as this is the first time anyone could reach the Orb in 300 years.

6
How were the others able to handle the power of the stone?
13
How did Thor know the Power stone was in play?
15
How did Jane survive absorbing an infinity stone?
46
How does Thanos know where all the infinity stones are?
7
Why would Gamora go to Knowhere assuming Thanos would be there?
17
How did Peter Quill know where the Power Stone was, even if he didn't know *what* it was?
16
How can Infinity Stones be handled by humans but almost killed Peter Quill?