Why does Tommy wear a hockey mask in the end of Friday the 13th: A New Beginning?

In the movie Friday the 13th: A New Beginning, Roy is the one who is pretending to be Jason Voorhees and is the killer of the movie. But in the last scene of movie why is Tommy seen with a knife and wearing a hockey mask? What is the significance of this scene? Is it connected to its sequel or is there any other explanation?

I also read the whole story of sequel Friday the 13th Part VI:Jason Lives on Wikipedia but nothing strikes my mind.

Actually, more is explained in the previous film, Friday the 13th part IV: The Final Chapter. Tommy Jarvis has a hobby of creating and customizing masks even before he meets Jason Voorhees. The first time that we actually see Tommy, he is wearing a mask of his own creation:

TOMMY'S MOTHER: That's a nice mask. You're getting terrific at making those.

TOMMY: Thanks. I just customized it. 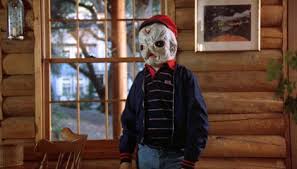 The plan was to show how Tommy loved masks and how Tommy would be the next "Jason" picking up where Jason left off: From an interview with Director Joseph Zito:

So...filmmakers were trying to move the franchise in a different direction with the ending of Part IV and V attempting to make Tommy Jarvis the killer.

The previous film in the series bore the subtitle The Final Chapter and the producers of this installment intended to take the franchise in a new direction, but fan outrage over the infamous twist ending led to a more traditional approach with Jason Lives.

The ending of part IV: The Final Chapter left fans thinking that Tommy might be the new Jason. Filmmakers would do this again with the ending of Part V: A New Beginning leading fans to believe that Tommy would be the next killer and that killing Roy the ambulance driver threw him over the edge and he finally snapped and put the hockey mask on to become Jason. However, fans were extremely upset that Jason Voorhees was gone and did not want Tommy or any other "copycat" killer.

Tommy returns in Part VI and inadvertently raises Jason from the dead.

After digging a little, I found this link which states:

Ultimately, Tommy killed Roy in self-defense and exposed his true identity; nonetheless, this event seemed to push him over the edge, leading him to attack Pam while donning a hockey mask fortunately, however, Pam managed to return Tommy to his senses and help him recover before things went too far

In movies this scene got cut, but this cleared my mind about this question.

Maybe because Tommy was actually the killer... :S Or, the producers of the movie just wanted to say that the story will never end: there will always be someone replacing the 13th Friday killer. In this way, even if Tommy did not kill anybody, he may be crazy enough to kill someone in the future.

26
Why does Bane wear the mask?
9
Why didn't Oliver wear the mask?
3
What happened to Paul in Friday the 13th, Part 2?
3
What is the chronological order of Friday the 13th franchise?
9
Why is the cut on the wrong side of Jason's hockey mask?
9
How did they come up with the idea of using a hockey mask for Jason Voorhees?
11
How come the new monarch does not wear any crown?
0
Why does “The Post” end at the beginning of the Watergate scandal?
4
Why did they not wear any mask to conceal their identity?