Why was the sound of an off-screen gunshot removed from a critical scene in a Magnum P.I. episode?

I’ve been rewatching old Magnum P.I. episodes and noticed something odd in the episode titled “Never Again ... Never Again” which is the 7th episode in the 1st season of the show.

Without giving too much away, at the end of the episode, Thomas Magnum is confronting a killer who is threatening him on a boat. The killer has a scalpel in their hand and Magnum has a gun in his hand. He warns the killer to drop the scalpel with the strong implication being that if that does not happen, he will shoot the killer. There is a closeup of the scalpel still in the killer’s hand, a cutaway shot to the boat out at sea and you are half-expecting to hear a gunshot at that moment; clearly implying Magnum followed through on his threat and shot the killer on the boat during the cutaway shot. 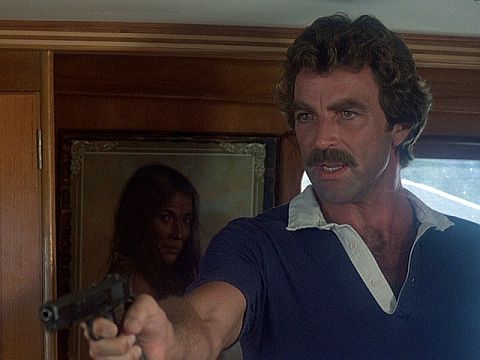 The next day we see Magnum walking somewhat mournfully on the beach with Higgins updating him on some details of the case. Nobody says anything indicative of what happened previously like “Well, you had to do it…” or “You had no choice…” or anything to confirm the killer was shot/killed.

As a viewer who has not watched this episode in years, this was incredibly odd from a story-telling angle.

Without the gunshot during the cut-away shot, the whole climax plays out awkwardly and the epilogue to the episode is even more awkward. Looking up episode details on the fan website Magnum Mania! reveals the following; additional discussion about this issue can be found on that site’s message forum:

In the original broadcast of this episode, the climactic scene with Magnum and Lena on the boat had Magnum shooting Lena (off camera)*. During the cutaway to the boat, after Lena displays the scalpel, a gunshot is heard. The gunshot was removed for syndication airings and on the Season One DVD. This leads to a confusing situation as the viewer is now not sure what happened to Lena.

Okay, that makes some sense: When the episode originally aired, there was a gunshot sound. But when the same episode went into syndication and was released on DVD, the gunshot sound went missing.

But why was the gunshot sound removed at all? I cannot find any info or reference explaining why this gunshot sound was removed from this episode after it’s initial broadcast airing. What could the rationale be?

The removal of a minor scene in a television series was often (especially before the 2000s) an editing decision made by the purchaser of a syndication package (a group of television episodes usually comprising a single season). In certain instances, a decision was made to remove anything that depicted a murder, including off camera, but audible gunshots.

It has been 35 years since that episode aired originally and many of the participants in the direction and editing are now deceased so obtaining their answer for the decision would be impossible. However, having seen every single episode of the series a minimum of five times on various mediums (including owning the box set personally) I can definitively state that while offscreen gunshots have been removed in some of the syndicated television airings, in the DVD box sets those offscreen noises have been returned. In one case, a scene that was removed from an episode and had not been shown in over 30 years on television was reinserted.

The decision to remove the offscreen gunshot seems to have been an editing decision made when the syndication package was sold.

11
Why was Beca's riff-off considered invalid?
6
Why was the cocoon scene edited out of Alien?
2
Does the DVD version of Galavant change this joke telling viewers to set their DVR?
11
Why was Amarendra Baahubali calm while being removed from his position as army commander?
1
What happened to the scene in Babylon 5 where Kosh kills the NaKaleen Feeder?
4
Why was the saw scene cut from Ferdinand the Bull?
2
Why was the scene cut without any reply from Zakharov?
2
Missing scene from Snow White and the Seven Dwarfs
1
Was Agathe's hand supposed to be trembling playing roshambo against John?