What exactly was the "dirt" on Daniels in The Wire?

Now that I am rewatching the whole series, I don't recall that I ever fully understood what Cedric Daniels in "The Wire" did while working in the Eastern District.

What was in the file that Deputy Burrel put on the table in E12S01? 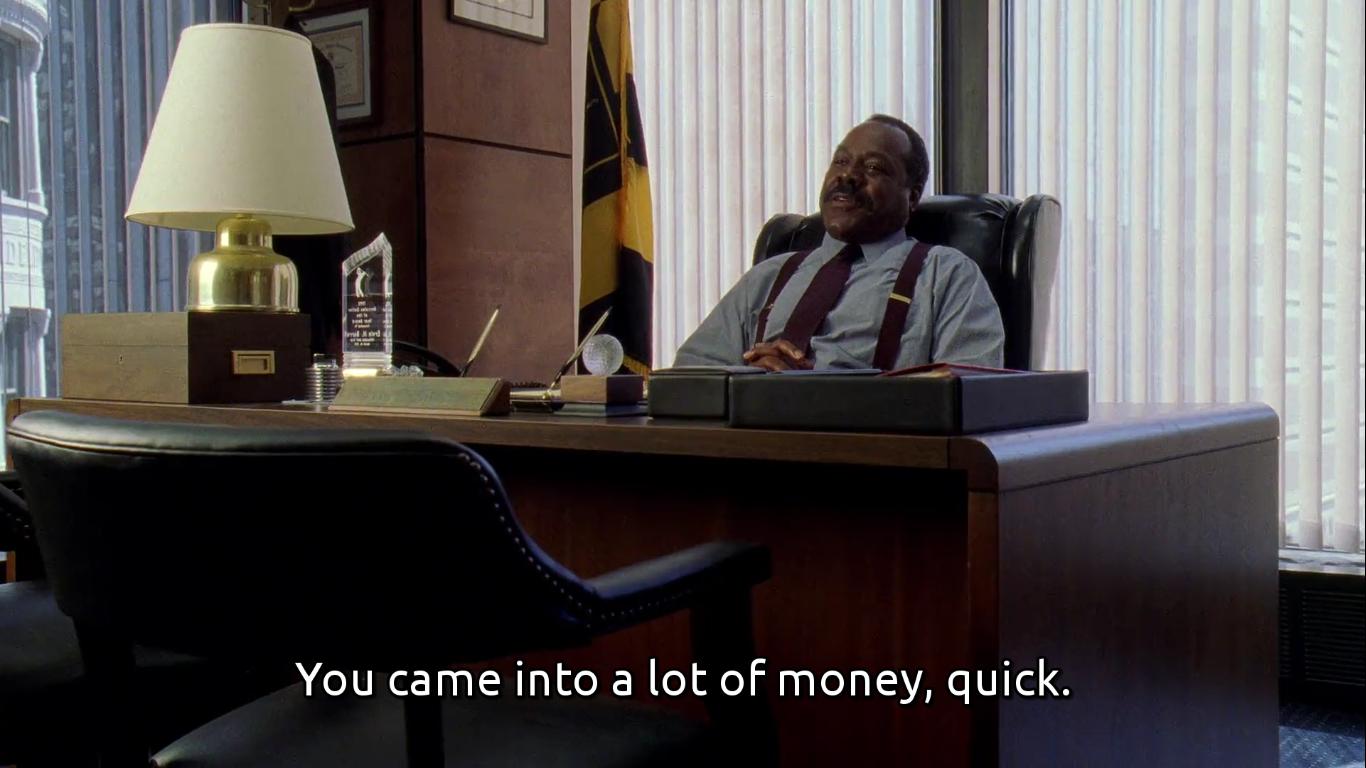 Burrell: You want to talk about dirt? Have at it. Talk some shit about your Eastern district days. Talk about what was going on back when you was running wild in the DEU.
Daniels: That's just talk.
Burrell: Just talk? FBI field reports. You came into a lot of money, quick....
Daniels: You wanna put my shit in the street? Feel free. But the Eastern had a lot of stories. Mine ain't the only one. A lot of people came through that district.

Daniels worked the Drug Enforcement Unit in the Eastern District, and like most of the characters on the Wire, he's done some dirty stuff himself. In his case, as drug money is an easy target and hard to trace, it was likely that he confiscated some of it himself, enough to afford a fairly lavish lifestyle for a police lieutenant.

In episode 1, we meet McNulty's FBI contact, who tells him that Daniels is dirty.

McNulty: You know Daniels? Narcotics?
Fitzhugh: What about him?
McNulty: He's running this detail.
Fitzhugh: Watch your ass then.
McNulty: He a snake?
Fitzhugh: No, he ain't that. But he's a company man. You know, a prospect...

Daniels had several hundred thousand dollars of questionable liquid assets; it is later implied that these were picked up during Daniels' tenure in the poorly-supervised Eastern district.- Wikipedia

Apparently this had been uncovered by the FBI, who handed the evidence to Burrell, who chose to bury it.

He also warns McNulty that his commander Cedric Daniels was investigated for corruption by the FBI and they had found an excess of liquid assets. After they handed the case over to Deputy Commissioner Ervin Burrell, nothing further came of it. - Wikipedia

Burrell talking to Nerese about Daniels when Burrell realises his job is under threat by getting replaced by Daniels:

Burrell: He's not the spick and span boy they think he is. He came up in the Eastern District, part of a bad drug unit skimming seized drug money. I actually had the Feds...
Nerese: [interrupts] This isn't about Daniels...
...

Edit: Just wanted to add that in one of the earlier seasons and episodes, Carver and Herc were 'caught' taking drug money for themselves when the recording off the wire didn't match the amount seized (the bin bag of cash ripped in the trunk of the car leaving a wad of cash behind). Daniels picked on the discrepancy and came down hard on Carver and Herc. With the Burrell information above in mind, it sounds like this is the kind of thing Daniels was involved in or associated with and wanted to prevent Carver and Herc from dirtying themselves and ruining their careers and maybe further dirtying Daniels.

It's a storytelling technique to leave questions opened and details blurred. Sometimes it's just an story opener like rosebud in Citizen Kane or the briefcase in Pulp Fiction and sometimes it's a fuzzy detail of the background story of a character like the relationship of Walter White and Gretchen Schwartz in Breaking Bad or if Mr. Pink in Reservoir Dogs could escape.

This storytelling technique leaves space to think, to talk about, to decide and to add missing pieces by your own.

So, in my opinion it's unanswered intentionally what Daniels has done or not done during his eastern district days. It could be just defamation. The recipient has to decide.

So, what do you think?

Given that all of this information comes to us in the first season, I look to the subject matter. All the corruption and dirty money exchanges between politicians and drug dealers. It makes sense that working his way up the chain, Daniels came onto a bunch of drugs that were tied, in some way, to a politicians name. He was told he could bury himself if he pursued the evidence, or take some money and leave it alone. It would also explain why when they picked up day-day he was very earnest about just letting him take his money and leave.

He was straddling the fence between doing whats right and trying to work his way up without ruffling too many feathers. I think his past actions are what made him seem so much like a flippy floppy character in season one.

I agree that it is open to interpretation as to what type of dirt they have on him but it's obvious he has way more money than he should and when Daniels was speaking with his wife and she asked him what they had on him he just sighed and didn't say that they had nothing on him rather they just cut to a different scene and let you wonder. It is reasonable to hypothesize given the information that they told us about it that Daniels was dirty in some way shape or form when he worked at the Eastern district. As the user above States, he most likely stole money that they seized. That's why he didn't want herc or Carver to do the same thing because he felt guilty about it and perhaps looks at things differently now.

15
Detective Leander Sydnor - What was the point?
6
What was the red sky in V?
12
Have Finch's back problems been explained?
18
How were the coastal walls supposed to block the Kaiju?
7
What was the significance of Kurtz joining airborne
4
Why didn't they go through with taking the case to the feds?
11
Why didn't Bubbles face any consequences for his work as an informant?
9
D'Angelo tap, tap, tap murder reference
4
Exactly what kind of illness/disorder was Arthur suffering from?