Where are Monica and Chandler's apartments?

In the TV show Friends, what is the real world address for the building always shown in exterior shots of Monica's (and the separate apartment across the hall which was formally Chandler's, and is now Joey's) apartment building?

No. 90 Bedford Street, on the southeast corner of Bedford and Grove Streets, stood-in as the exterior of her building. 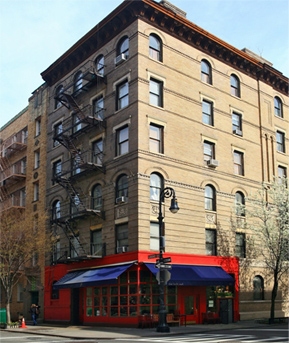 In the ground floor of their building was the coffee shop, Central Perk, where the gang spent the other half of their time. There is a ground floor food establishment at 90 Bedford, but Central Perk is a little more down-to-earth than today’s real-life counterpart, the Little Owl restaurant.

Not the answer you're looking for? Browse other questions tagged friends film-location .

8
What was the first acting job of Joey Tribbiani seen in Friends?
6
When did movies first start to show real world from inside a car?
10
What does the casting director mean by "be authentically, anatomically not Jewish" in Friends?
5
What does Phoebe mean when she says "I bet they're doing it"
2
Was Monica Gellar a bad cook?
2
7 Erogenous Zones by Monica
17
How could their neighbor spy on both Monica's and Joey's apartments?
2
Why do Joey and Chandler shut off the VCR?
6
Do establishing shots require a property owner's permission?
2
How does Joey have money to lend?