Did Arya really see that the Thin Man was a wrongdoer?

I still don't get all the explanations about The Thin Man (Game of Thrones, S5E08, the man who sells "insurance service") which I've read until now in all Q&A forums: the description of the man and the scene in the show, how they coordinate.

According to the explanation, the Thin Man takes the "premium", but refuses to pay the compensation (the "claim") in case an accident occurs to the captain. OK, fair enough - he's a scammer, and the family of the dead resort to the Faceless Men. His life is decided to be taken.

HOWEVER, in the TV show, Jaqen told Arya "a girl would see" [which means Arya would see for herself the thin man is the wrongdoer]. What did she see?

99% of the explanations go by "the man did not pay the captain's family" (?!) In the scene, Arya overheard the conversation in which the captain made his 18th successful voyage, 'without a scratch', and is still alive. How come the thin man have to pay?

When Arya was there to see, it seems that the captain wants to buy the "insurance service" but the thin man refuses to take the "premium" (thus declining to provide his service). He looks at the captain's 'application' and says "Can't do it".

This is totally legitimate in real life. In many cases, it would be a wise decision of the insurance firm, if they deem the deal is too risky. Or - they will do it, it's just the premium will be ridiculously high, so that for the insured it's not worth buying insurance that way. Anyway, insurance is all about risk (probability) assessment and risk-loving/risk-aversion.

Looks like the captain wants to buy insurance for his 19th/future voyage(s), but got turned down by the thin man. The captain showing that he safely returned from his 18th voyage is pretty much like a driver showing the insurance firm that he has a clean record (no accidents, no pulled-over, no claim before...), so that he would get the low premium fee.

But the thin man is not a wrongdoer if we base ONLY on what Arya has seen. He simply doesn't "take the bet". Every words that judge him are from Jaqen's mouth.

(1) Why did the show producer make it so confusing like that?

(2) The thin man is betting that the captain is doing some suicide mission or it's too risky for him to take the deal? That I don't understand as well. Why didn't the Thin man take the money? If the captain returns safely again, he got the premium, if he cannot make it, the thin man still avoids to pay his duty. Strange, isn't it?

Remember that there's no insurance fraud like in these days, where someone intentionally burns down his old garage to claim huge insurance, and the words from Jaqen go like: "It's a strange wager for the captain, he only wins if he loses his life." It is very unlikely that the caption would end his life to get a sum for his family.

She wasn't observing him to decide his guilt, but to find out the best way to kill him

When Maybe-Jaqen asks Arya what she saw while observing the Thin Man, he wasn't asking if proof of his guilt was found, but rather what his daily routines were. The Faceless Men, as @Reyssor pointed out, are not vigilantes out to right the wrongs of the world. They are assassins for hire. You pay them to kill someone and they do it, regardless of what the reason for target's death is. Maybe-Jaqen didn't send Arya to kill the Thin Man because he was a scammer, he sent her to kill him because the client wanted the Thin Man dead because he was a scammer. Arya's daily routine as the clam seller was to observe the Thin Man to find the best way to kill him. Whether he was guilty or not doesn't enter the calculation, though perhaps Arya (being inexperienced) might have need to confirm his guilt, although we never get to see her thought process on that front (and the scene was not in the book) so we don't really know either way.

For question #2, for a brief moment you can see that the man is holding a map of Valyria. Presumably this sailor was taking the route through and near the Doom of Valyria, which is generally considered cursed by the majority of people in Essos and Westeros. It would be perfectly normal for the thin man to believe this superstition, giving him reason enough to decline his services to the sailor.

As you can see in the below picture, the route that is shown goes straight through the ruins (it's the cluster of islands at the bottom right side of the map - the route goes through it). Superstition aside, it could be considered a highly risky suicide mission and the thin man's business is based around minimizing risk, so his rejection is kind of understandable. 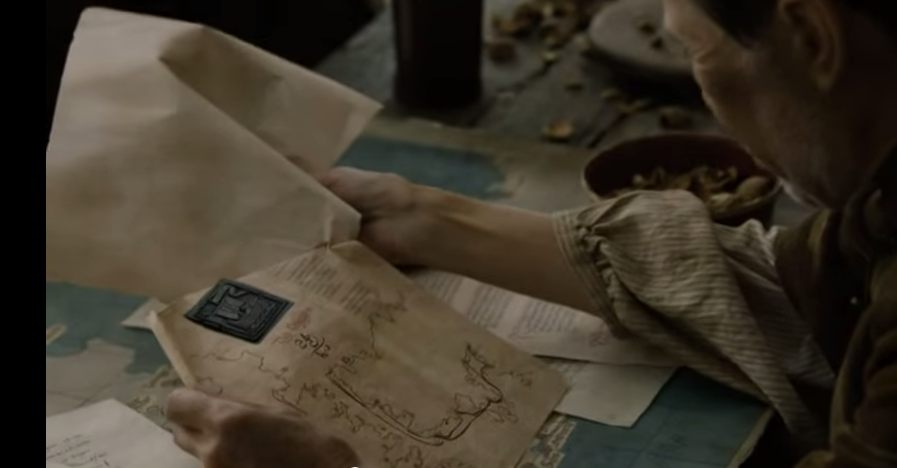 All the answers were very nice and it's much clearer now. I should only leave a comment but for the sake of completeness/clarity and to be able to quote image (some interesting notes I found on the internet as well), I'm grouping the point in a single answer. 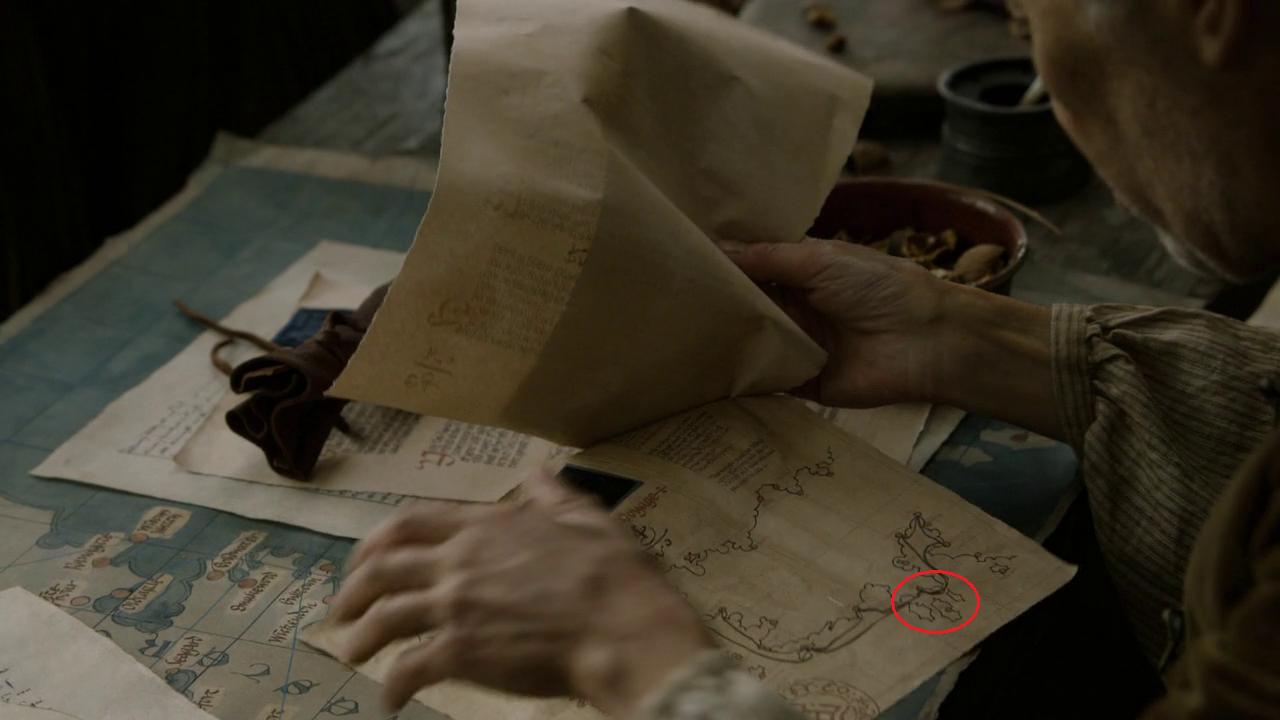 Anyway, the show runners were a bit off-course from the book (especially in season 5?), and when they try to get back on the track, they mixed things, and sometimes not in a good way. (E.g. this very example shows how misleading and confusing the content could be if they mix and match the scenes that way. Bad way to illustrate his wrongful acts/business model).

This is with reference to the book. She wanted to find a way by which she could kill him and no one else without getting caught. It took her three days to find a way.

“The guards go with him even when he slips out to make water,” she said, “but he doesn’t go when they do. The tall one is the quicker. I’ll wait till he is making water, walk into the soup shop, and stab the old man through the eye.”

“And the other guard?”

“Are you some butcher of the battlefield, hacking down every man who stands in your way?”

“I would hope not. You are a servant of the Many-Faced God, and we who serve Him of Many Faces give his gift only to those who have been marked and chosen.”

She understood. Kill him. Kill only him. It took her three more days of watching before she found the way, and another day of practicing with her finger knife. Red Roggo had taught her how to use it, but she had not slit a purse since back before they took away her eyes. She wanted to make certain that she still knew how. Smooth and quick, that’s the way, no fumbling, she told herself, and she slipped the little blade out of her sleeve, again and again and again. When she was satisfied that she still remembered how to do it, she sharpened the steel on a whetstone until its edge glimmered silver-blue in the candlelight. The other part was trickier, but the waif was there to help her. “I will give the man the gift on the morrow,” she announced as she was breaking her fast.

A Dance With Dragons

Not the answer you're looking for? Browse other questions tagged game-of-thrones plot-explanation .

20
Why didn't Harry himself drink Polyjuice Potion instead of all others in Deathly Hallows Part 1?
25
Why were they supposed to shoot the puppy?
5
Why was Brooks released? Couldn't he have squealed on the Shawshank crimes?
29
Who is the third man that Sandor Clegane is referring to?
10
Why didn't Randyll Tarly avenge the theft of the family sword?
2
Did Bran see Arya when he breaks eye contact with the Night King?
8
Does Bran know that Arya is a faceless man?