Is there any information if Deadpool will break the fourth wall in the 2016 film?

In the comic book, Deadpool is self-aware of his existence as a comic book character and often breaks the fourth wall. 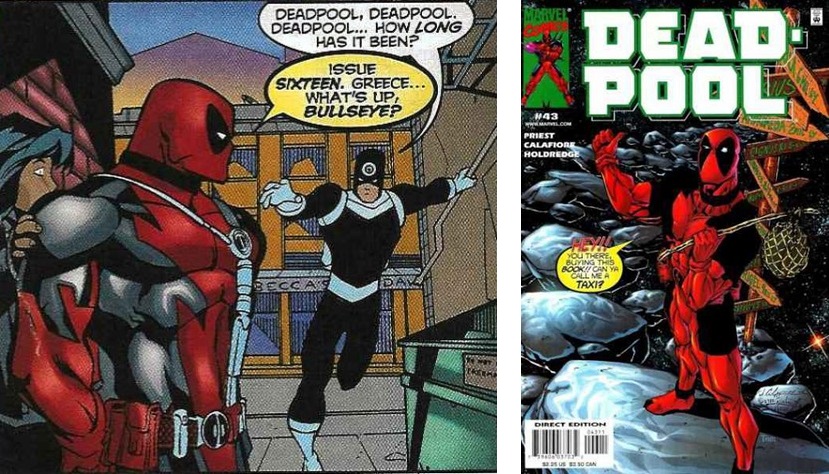 Will they do this in the upcoming film, too?

Is there any evidence or secured information, e.g. in the form of a recent interview or article about the film, that confirms or denies that this aspect of Deadpool will be part of the movie?

From the green band trailer, Deadpool certainly seems to be self aware as a character in a film and does break the fourth wall. In one of the fight scenes he looks directly into camera and says "Cue the music." at around 1:28. This bit is omitted from the red band trailer (NSFW), which is what most people seem to be watching.

In addition to this, in an interview with Empire, there's a quote from the director about the Green Lantern reference in the preview where he specifically states that, while Wade Wilson doesn't break the fourth wall, he implies that Deadpool does.

"That got a good laugh at Comic-Con. For the most part, we try to stick to the rule that Wade Wilson can’t break the fourth wall. He’s not aware that he’s in a movie. Deadpool is. He only breaks the fourth wall when he’s Deadpool. So we’re tiptoeing on the edge of breaking our own rule there, because he’s still Wade at that point.

This quote is from an interview at the 2015 Comic Con.

Donner said that she wants the film to ignore the Deadpool of X-Men Origins: Wolverine and reboot the character. She also stated that Deadpool will have the attributes that the character has in the comics, such as breaking the fourth wall.

Look this link too.

As noted, in the trailers, the "Please don't make my supersuit green or animated" line is an example of Lampshade Hanging, as are the "sewing his mouth shut" moments. These are meta references that the audience knows about, but made some sense in-universe during the movie. The "Cue the Music" is also a Lampshade Hanging.

Once Wade has gone and adapted to being Deadpool, there are several Leaning on the Fourth Wall moments:

Gum on the Car Window/Camera.
Glances towards the camera.

Then there is the direct Fourth Wall breaking:

Deadpool directly speaking or referencing the audience multiple times. The other characters ignore this as typical Wade insanity. These asides are heard by the others but not understood/believed.

And a few moments of No Fourth Wall:

Not the answer you're looking for? Browse other questions tagged character x-men-cinematic-universe deadpool fourth-wall .

16
The origin of the loss of the Fourth Wall?
5
Can Product Placement in Movies break the 4th Wall?
10
Will Jar Jar Binks be a character in any of the new Star Wars Films?
9
Does time stop when the fourth wall is broken?
1
Is there some additional Information about the killer couple in The Raid 2?
10
Is there any significance to the Angels' wing colours?
8
Are there any Indian movies which contain breaking the fourth wall?
2
Is there an industry term that describes the degree to which a body of work breaks the 4th wall?
4
Did Brian Finch break the fourth wall?