What did they use to make the Jetsons flying car sound effects?

How did the Foley artist make the futuristic Jetson flying car sounds in 1962? 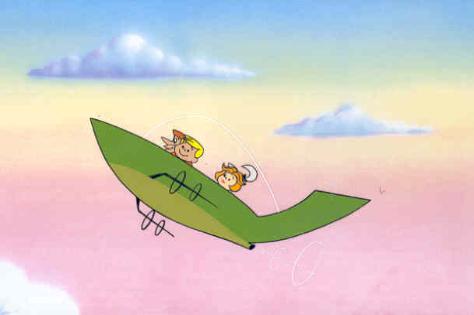 Take it for what it is; some random dude on teh Intarwebz.

I had the opportunity in the early 80s to work with Warner Leighton who created many of the effects in the HB sound effects library. The methods he used to create the effects were both inventive and hilarious.

The Jetsons' car flyby effect was created by putting the muzzle of a pop gun into a cider jug and pulling the trigger. Then he did it again and again, with the muzzle pulled a little further out each time to vary the pitch of each pop. He then isolated the "pops" on the 35mm mag stock and spliced them together at even intervals to create the doppler effect.

I just listened to it in the show lead-in on the Hanna-Barbera section of Warner Brothers, Turner website. To me, it sounds like a metal gym whistle being blown with a finger covering part of the opening. Back in my lifeguard days, I played a lot with my nice chrome-plated whistle, from loud to almost no sound at all.

Okay, facebook wouldn't let me upload an audio clip and I didn't have anywhere else to post one so here's a link to a video I had to produce - just so you folks can enjoy (heh) the sound track.

My guess is that it is the sound of the magnetic field generated by an electric motor, that is turned into an electrical signal by an inductive transducer (similar to the pickups on an electric guitar), recorded on magnetic tape, and played back at variable speed.

Some years ago, I put a inductive pickup (that was sold by Radio Shack to record telephone calls via "listening" to the handset speaker) on a hard drive and recorded it spinning up and powering down, and it made some really cool sounds. A variable speed cordless drill also sounded very sci-fi.

I think it kinda sounds like a recod on a turntable being slowed to a stop. More likely, They probably recorded a single tone on tape and then played back with the engineers thumb on the reel to slow it down to a stop. Sure would like to know for sure. It's a very cool sound. Of course, how the actually made the sound back in the day was probably pretty easy! The things always are fasinating.

If I remember correctly it was a vertically oriented metal disk (approx 12-18in dia) mounted on a table and had a handle at the axis for rotating it manually, like a bike tire. It had evenly spaced holes drilled in it in concentric circles (so it looked kind of like a strainer covering a bathtub drain). The sound was created by holding a plastic tube (that was connected to an air pump) near the holes as the disk was turned. I believe the air pump was either sounding a reed-like device or was being modulated at a specific frequency (kind of like the TalkBox used by Frampton).

I vaguely remember a plastic bellows like toy as a kid with a double acting whistles in it. If two of these were placed on a small crankshaft(such as an old player piano wind motor with one end of each wistle secure...and the moveable ends opposing each other thus should make a sound like that the crank us turned.

14
How did they make the Inception sound?
4
How much of a film's sound effects do foley artists typically work on?
43
Why do old movies sound like old movies?
5
How are the sound effects of the Shaw brothers martial art movies produced?
21
What was used to create the hyperspace jump sounds in the original Star Wars trilogy?
6
Do sound effects, specially in horror movies, use emotion initiating frequencies?
2
Why do some movie remasters replace the original sound effects with new ones?