That's about all I remember, aside from the conditions of that game being highly emotional (the prisioner facing execution, deportation or somesuch?).

I watched that movie on TV a long time ago (try 20+ years), and the memory has a feel to it as if it was already old at that time. Probably a German production, somewhere between the 50's and the 70's perhaps. (Black & white? Possibly. Likely, even.)

The movie worked on the premise that the audience knew about the holocaust, and pictured the prisioner as quite likeable, which rules out any wartime / late 1940's production.

Can you identify that movie?

Three prisoners in a pre-World War Two French jail occupy the long hours before their courtroom trials, each after his own fashion: the young German sailor Lodeck teaches chess to the elderly Jew Grünstein, while their simpleminded Greek cellmate daydreams aloud about being Kaiser Wilhelm's personal chef. Showing more patience than aptitude, the novice Grünstein unwittingly stumbles onto a foolproof chess strategy, the secret of which will elude a mystified Lodeck for the rest of his life. It may play like theater, but it's good theater, written and directed with humor and sympathy and graced by a trio of fine performances.

I guess you got some parts wrong, but it should be the German movie Schachnovelle

In WW2 an intelectual (not a Jew) is arrested and isolated in a hotel by the Nazis. He teaches himself chess only by a book he found at his prison. After the guards find the book and take it away, he starts, like you described, to build chess pieces from bread and uses his blanket as board (but he plays not against his guard/interogator, only against himself). After WW2, he is freed but a broken man. He travels with a ship to America, and the chess champion is also on the ship and invites some people to play against him. The ex-prisoner then tells the people the move you mentioned, so they can win against the chess champion. 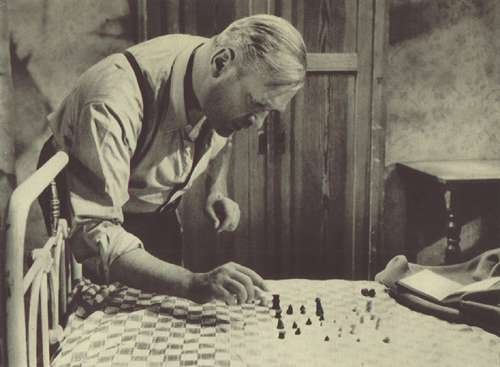 Playing chess on blanket with pieces build from bread

EDIT: I just found the film on youtube and saw that I remembered some details wrong:

But I rewatched the scene where he builds chesspieces from bread, I guess there will be not many other movies which include such a scene (that was the main reason I could identify your question, because these scene was stuck in my head when I watched it many years ago):