Why does Spider-Man (Sam Raimi version) not start out his career wanted for murder?

In the first Spider-Man movie, when Peter tracks the thief who killed his uncle to the warehouse and confronts him, the thief stumbles backwards, trips over a raised pipe on the floor, and falls out of an upper-story window to his death. Peter then steps up to the window to look out.

To an outside observer who didn't see the pipe, it looked exactly like Peter had just pushed him, and the "outside observer" is not hypothetical in this case: there were cops nearby with a searchlight. They turned it and got a good, solid look at the "murderer" in the window, and he was wearing the Spider-Man costume.

I remember the first time I saw the movie, thinking "oh no, now he's going to start his career out wanted for the murder of that thug," ...and then nothing ever comes of it. No police want to find Spider-Man or take him in for killing the thief, despite what looks like a clear set-up to have this as a plot point.

Did anyone involved in the making of the film ever talk about that?

Because Spiderman wasn't known yet and they were too far away. Peter Parker also didn't wear the costume he's later known for but rather a crude costume he made for a wrestling match. In fact, from that distance it just looks like a random guy in a baggy red pullover and jeans: 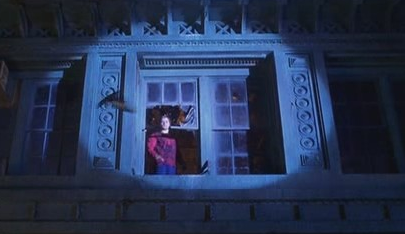 Even if they did spot that spider symbol and made the connection later when he became famous, there's really not enough evidence to tie this back to Spiderman and could be ruled as a coincidence.

Not the answer you're looking for? Browse other questions tagged plot-explanation spider-man-trilogy .

14
In Spider-Man 2 Why does Parker lose his powers?
24
Why does Robert Angier not use a double for "The Real Transported Man"?
5
Why did the producers of Spider-Man 3 not want Topher Grace on That 70's Show?
3
Why was Patrick not arrested for his murder?
13
Does Uncle Ben know Peter Parker is Spider-Man? If not, why would he suggest Peter has any "GREAT power?"
2
Why is Sam specifically looking for 3 out of the same 4 Batman comic books?
11
In Spider-Man 3, why does MJ lie?
3
What happened with Steve and the sketchbook?