What factors go into determining what trailers are played before movies?

As we all know, the most exciting part of seeing a movie is the trailers of upcoming movies before the actual film (note, this is coming from an American point of view, I am uncertain if this occurs in theatres everywhere).

Is there a strict guideline trailers are released controlled by the MPAA or do the theatres have free run of what to show?

I have a friend who owns a (very) small theater... so some of this probably isn't "official" (I know they bend the rules a bit at times). Also, they operate only on film, I'm not for sure about digital

Anyway, one thing a lot of people don't realize is that film is usually shipped on 6 or so small reels. The movie theater then tapes together these reels into usually 1 or 2 big reels(depending on what's capable of the projector and the size of the movie). During this time, they add on small preview reels.

From what I can tell, usually 2 or 3 previews are shipped with a particular movie. It's not mandatory that theaters put them on, but they are usually the latest, so it gives theaters a good incentive. Unlike movie reels which must be returned, preview reels can be kept by the movie theater. So the movie theater can of course add on more previews if they wish as well. I believe it's allowed for them to add no previews on as well.

As for how they select which previews are shipped with blockbuster movies, see the other answers

Here's an article answering your question. In short:

This answer is based on some guesswork, but may still be of interest.

Here's a photo of a computer running a digital projector in a small cinema in France. It's running software called Cinelister and you can see the playlist on the right. 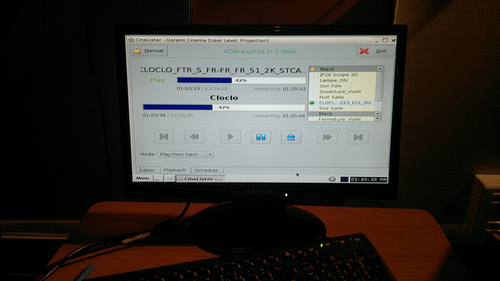 It's part way through the showing of a film called Cloclo (2012). I didn't attend the screening, but I assume trailers were shown at the start. As far as I can tell from the playlist, there's no separate trailer section, so my guess is they were part of the main feature item.

Not the answer you're looking for? Browse other questions tagged trailers film-industry .

2
Any source to list the trailers that showed before a particular movie?

23
Why are movies so different from the original books?
49
Why are trailers called "trailers"?
4
Why are there so many Shark based monster movies these days?
17
How are digital movies sent to a movie theater?
4
Are trailers copyrighted or not?
4
Why are MPAA ratings placed differently in movies vs trailers?
6
What is the bit-depth of a movie played in the movie theater?