Dance and costume scenes in 'The Act of Killing'

What a great and scary documentary all in one. I am sort of disturbed after watching it on Netflix last night but I'm glad I did.

One thing that confused me though were the choreographed dance and costume scenes that feature two reenacting gangsters (Anwar and Herman) as well as female dancers that don't appear in the rest of the film. How do those scenes fit in with the rest of the plot? What is the significance of Herman's cross dressing and the big fish that they dance out of? 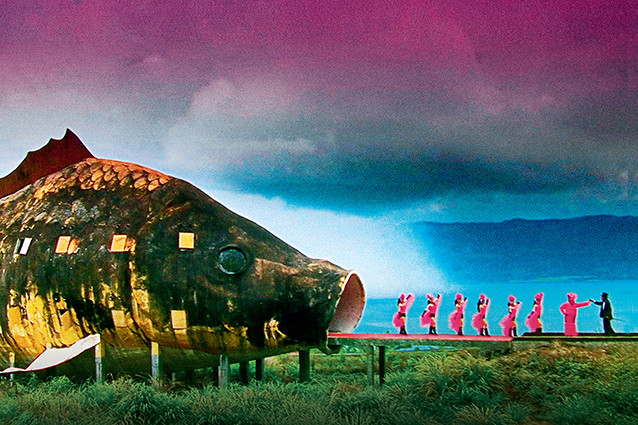 As you might have noticed, the reenactments that Anwar does with his men get more and more surreal throughout the film. Starting from gangster movies and westerns the scenes evolve into visions of ghosts haunting Anwar, over the weird cross-dressed Herman cutting his throat and feeding him with the flesh of his victims upto to that "Born Free" song at the end where his victims ultimately even thank Anwar for sending them into heaven.

We can approach this from multiple perspectives that all make sense in the way of explaining why those song, dance and cross dressing sequences seem so rather weird. Most of those aspects are reinfocred by director Joshua Oppenheimer himself in an interesting interview with Collider.

So those scenes are in a way surreal because the reenactment movie itself touches more and more abstract topics but also because Anwar tries to run away from his real guilt into more and more surreal distortions. And on the other hand the increasing absurdity of the scenes also adds to the surreal farce that the movie ultimately is, something that is so much "realer than reality" and maybe only bearable through utter absurdity, for us as much as for Anwar.

But Oppenheimer does say even more about the song and dance scenes specifically, both the heaven scene at the end as well as the fish sculpture at the beginning (which is a little less connected to the overall story than the heaven scene), again reinforcing the overall notions of handling reality by surrealistic distortion that the whole movie ultimately consists of:

Going back to this note about the surreal, now the surrealness definitely comes through in his nightmares, but for most of the scenes there is something grounded, something remembered, but the one scene where they’re doing “Born Free,” how did that come about? ‘Cause that is obviously the most surreal scene in the film.

OPPENHEIMER: Well, there are two reasons for it, one of which we see, which is “Born Free,” and it kinda came up where we see it. Anwar plays the victim; he wanted to cleanse himself from the ghosts that were trying to haunt him, and he proposed that we shoot this cleansing scene at this waterfall, which evolved into a full blown vision of his redemption in heaven. [...] So the scene came chronologically right where we see it in the film, and it served the function for Anwar that it appeared to, which is kind of a desperate, last ditch attempt to deny the meaning of what he’d done. The meaning was finally dawning on him as he got to play his own victim. There’s also the scene with the fish. That’s a scene, another musical number that we shot. It’s a former seafood restaurant that Anwar chose as a location for a musical number based on his favorite song, “Is That All There Is?” by Peggy Lee, and we shot the musical scene there, and it was amazing and surreal and strange. But in the end, I still have these moments, these artifacts from the scene that were so surreal, that were poetic embodiments about what the whole film is about. Mainly we get lost in our fantasies; just this destructive effect — that I had a choice: do I used a musical number or do I use these moments from shooting, and when you have such powerful, beautiful material. I couldn’t do both. I know I couldn’t do both, so I had to choose, and of course I chose the poetic embodiments of what the whole film’s about, which are climaxes in surrealness rather than the musical number itself.

How do those scenes fit in with the rest of the plot?

The plot is that a camera team is asking the people to make a movie about what happend. So the scenes fit in perfectly. Or you could say:

A documentary which challenges former Indonesian death-squad leaders to reenact their mass-killings in whichever cinematic genres they wish, including classic Hollywood crime scenarios and lavish musical numbers. from here

What is the significance of Herman's cross dressing and the big fish that they dance out of?

This is my personal understanding without mathematical proof :)

Is think Herman want to say, that he killed a lot of people but he was just a one of many. Like a fish in the ocean. Fish hunt in swarms and not alone. Like Herman he killed not alone but with his friends.

Not the answer you're looking for? Browse other questions tagged plot-explanation analysis the-act-of-killing .

17
What did the Dent Act do?
8
Why does Buster not join in the family chicken dance?
4
Have there ever been considerations about releasing the actual movie whose production The Act of Killing documents?
9
What is the significance of blue to green transition of costume colour between Frozen Fever and Frozen?
4
What is the explanation of "act of killing a bug"?
4
Was Batman complicit in the Dent Act?
2
What exactly happened with Kenny in Shut Up and Dance
2
In Endgame, why is the female leading the dance, and not the male?
3
What is the significance of Lady Kaede catching and killing the insect?