Significance of the air dancers in Nightcrawler

At one point in the film Nightcrawler, the scene is a morning in Los Angeles, possibly the only morning scene in the film where the hero is not watching television.

Plotwise, the scene is positioned after the hero and heroine are at a Mexican restaurant, and the hero seems to proposition her.

For a few seconds the scene includes two large balloons with anthropomorphic features. These have been set up outside presumably for a promotion. They snap and flex in the wind.

Are the gyrations of these balloons a suggestion that the hero and female lead have enjoyed a tryst? Or something else? Or just a random shot to portray life in LA? 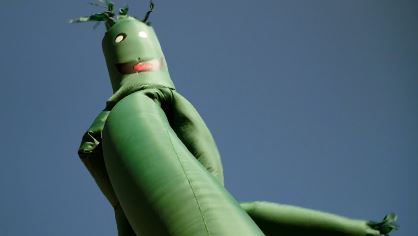 Instead of looking at the significance of just the green airdancer, let's look at the entire scene with the airdancer. We get a very lively microcosm of LA: the morning mist at dawn, sprinklers watering a golf course, people exercising at a park, a bright ferris wheel with neon lights, and airdancers making chaotic movements. What all these scenes have in common is life. Even the music is uplifting during this scene. All this life is meant to contrast and really emphasize how dark and loathsome Louis's life is. This is similar to the literary device known as foil, except we are not contrasting characters, we are contrasting scenes.

At face value, airdancers are devices that places of business use to get people's attention. They make a lot of movement and are usually of vibrant color. Airdances don't blend into their environment, they stand out. Sometimes they stand out enough so that people will go into the place of business and buy things. So perhaps you could argue that the airdancer is symbolic to Louis, as they both share the quality of trying to sell things and not being "normal".

Not the answer you're looking for? Browse other questions tagged analysis nightcrawler .