Why is a bright reindeer shown when Harry Potter was saving himself and Sirius Black from the Dementors?

In "Harry Potter and The Prisoner of Azkaban", if Harry (who time travelled) was protecting himself and Sirius Black from the Dementors then why a bright magical reindeer like image is shown on the other side of the lake?

It was not a reindeer but a stag. Harry Potter's Patronus is a stag. Harry and Hermione travel back in time to when they were standing on the other side of the lake. Future-Harry sees that Dementors are sucking the souls of Harry and Sirius and casts the Patronus. This Patronus is in the form of a stag. Hence Past-Harry sees a stag on other side of the lake. 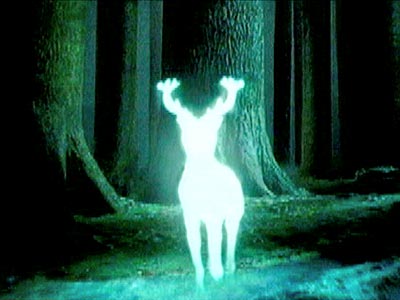 It was Harry potter's Patronus. He creates the Patronus for protection from the Dementors.

After future Harry came from time travel, he realized during the process that he has to save himself, he created the Patronus to help it past form.

From chapter 21 in wikia

After two hours, following Lupin's transformation, Harry decides they need to head back to Hagrid's empty cabin so Lupin doesn't attack them. After spending some time in hiding, Harry leaves the cabin to check out the present situation and sees himself, Hermione, and Black fainting from Dementors. He realises that the silver stag he saw earlier across the lake was not cast by his dad and conjures a powerful Patronus that drives all the Dementors away. When it returns to him, he pets it and realises that it was the same patronus as "Prongs," his father.

Not the answer you're looking for? Browse other questions tagged harry-potter the-prisoner-of-azkaban .