Why was Butch's taxi ride background black and white?

In Pulp Fiction, Butch has a scene where he takes the cab. In this scene, the background is black and white, and is quite surreal. 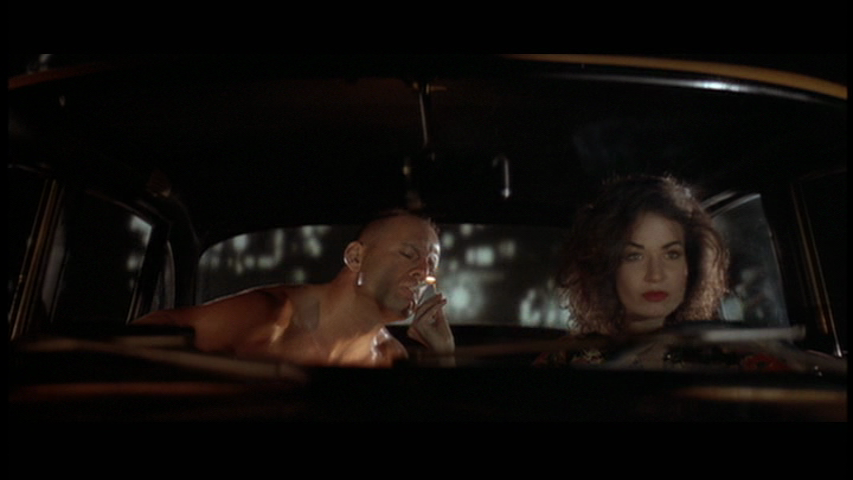 I managed to find this snippet from IMDB, but it does not mention why the background was black and white.

(at around 1h 12 mins) In the taxi, Butch throws his boxing clothes out a fully-open window, and Esmarelda tosses a butt out her open window. The squealing tires, near-miss as she leaves the alley, and background indicate she's driving fast. But as Butch smokes the cigarette, its smoke drifts slowly through the car, indicating it isn't moving because no wind is coming through the open windows. However, the back projection is heavily stylized in black & white, so the director clearly did not intend this to be a realistic shot. Although the shot may have been intentionally unrealistic, when Butch throws his gloves out the window a "plop" can be clearly heard, indicating no vehicle movement.

The Use of Black and White –tarantino.info

QT has had black and white sequences in two of his films. They appear in Kill Bill and Death Proof. These sequences are definitely inspired by his love of the way movies looked in the early days of cinema up to the way it was used in the French New Wave era.

“I steal from every single movie ever made,” Tarantino once told Empire magazine. “If my work has anything, it’s that I’m taking this from this and that from that and mixing them together.” –variety.com

This isn't sourced or anything (although I don't think that the director is the source of all the meaning or anything), but I always thought that that was one of the parts that were drawing attention to the movie's "movie-ness." The background in cars is one of those things in older movies that always looks off, whenever I'm watching an old movie and they're having a conversation in a car, it always jars me out of the story and reminds me that I'm watching a movie.

The French New Wave people saw that this was an interesting thing to have happen, to get jolted out of the story. It reminds you to think more about what everyone is doing to make the movie, that a movie is a false thing, plus Marxist stuff. Tarantino's moviemaking is always about the history of moviemaking -- he wants you to watch for that kind of stuff; it's part of the fun to him. By taking one of the things in standard movies (ones that strive for realism, so you can get lost in the characters, plot, and theme) that often fails and "lean in" to that failure, make it more obviously faked, he's trying to show the viewer how to watch the movie. Namely, don't forget that it's a movie, made up by people (the name of the movie is Pulp Fiction, after all).

The black and white scene in Kill Bill, according to something I saw, wasn't planned -- the movie had too much blood and was risking an NC-17 rating, which wasn't wanted by Tarantino or Miramax. By making the one part black and white, apparently the realism level dropped enough to get it by. This is also the reason that the other scene involving O-ren Ishii's childhood was done in anime.

Those practical reasons, though, don't mean you can't find other meanings in there, of course.

Not the answer you're looking for? Browse other questions tagged pulp-fiction .

29
Why didn't Vincent and Jules kill Marvin?
10
Was the radio announcement an innuendo that Vincent would be at Butch's apartment?
22
Was there an intentional reference with the quote “smoking cigarettes and watching Captain Kangaroo”?
9
Why was Vincent alone in Butch's apartment?
9
Why didn't Vincent and Jules use silencers in Pulp Fiction?
6
Why different footage was used for “Garcon, coffee” callback
0
Why did Jules and Vincent go to the diner?