Why was Don Draper self-destructive?

The recurrent theme of Mad Men was Don's self-destruction. Right from the start, he had everything - he was hailed as an advertising genius, his boss (Roger Sterling) was practically his friend, he was on his way to become a partner at the agency, he had a beautiful wife and three children and women (men too!) threw themselves at him. Why would he throw everything away? Year after year?

He had a guilt - of accidentally killing his commanding officer, and taking up his identity. Was that the sole reason? The guilt of taking someone else's name, so that he could return from Korea? In the series finale, he tells Peggy, "I took another man's name, and made nothing of it". But right from the start of the series he was a tortured soul and unhappy. He was making something out of that man's name. Did he hate his job? Did he think manipulating people's emotion, to make them feel 'okay' to sell things, was not okay?

This is a pretty complicated question as there are many contributing factors to Don's unhappiness. Beginning with S1E03 The Marriage of Figaro Don has a brief conversation with Carlton where Carlton compliments Don and his successes alluding to his house, career, and family, to which Don shortly replies "Yep. This is it." signaling his dissatisfaction with his life and how he feels uncomfortable even in his own house as we later found out is a partly a consequence of him constantly having to pretend to be Don Draper. We see signs of this when he goes to wash up after assembling Sally's playhouse when Betty tells him to not use a certain bathroom, and when he finally washes up there's a shot of him looking around at the fancy hand clothes and soaps in the bathroom and instead opts to dry his hands on his own clothes.

Later in Season 1 Don is met with Adam Whitman, his half brother whom he abandoned upon returning from the Korean War. Adam makes multiple attempts to connect with Don, only for Don to turn him away. This leads Adam to hang himself. This triggers a cascading effect in Don's life as he questions whether it was worth losing Adam, his last remaining family member, to protect his fake life with Betty, Sterling Cooper, and his children. Adam returns multiple times throughout the series, showing that Don never truly got over his death. Don begins to have flash backs of his time in Korea where his life as Don Draper begins with a traumatic explosion and death of his commanding officer (at his hands). At this point we learn that Adam is the second person to die as a result of an interaction with Don (and later Lane Pryce as well). Further showing Don's disillusionment with his life and how he even begins to resent it as he associates it with their deaths.

All at the same time, we see that Don/Dick Whitman feels guilty for taking Draper's name when he berates the executives for making fun of Freddie Rumsen peeing himself and soiling his name when Don retorts "Sure, it's just a man's name." Which is ironic as he taking another man's name to, as Roy puts it,

"[Advertising]? Perpetuating a lie, how do you sleep at night"

Which is another layer of conflict to Don as the nation begins to shift to the counterculture. In a flashback in S3E07, Don sees his father, Archibald Whitman, stating his dissatisfaction with what he's made of his life:

"What do you make? You grow bullshit." 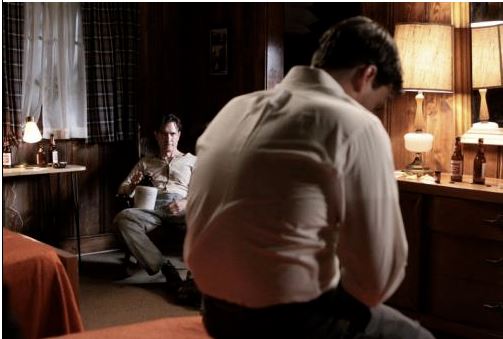 Again showing Don's internal conflict with his fraudulent life and the superficial nature of advertising symbolizes this. In the series finale he lists out his most agonizing internal struggles:

"I broke my vows. I scandalized my child. I took another man’s name and made nothing of it."

So to summarize, Don has lots to feel guilty about and he associates it with his superficial life which he subconsciously tries to sabotage as he feels that it brought about most of the pain in his life. There's lots and lots more and I recommend watching the show again, ever rewatch i've done has added new insights!

Not the answer you're looking for? Browse other questions tagged character mad-men .

10
Why have Joan and Don never gotten together?
14
Why did Don Draper steal the identity of his fellow soldier?
6
What movie is Don watching?
10
Why didn't Draper fire Peter?
10
Why did Draper pay the Elevator Attendant to shut off service?
7
Don Draper's Past With Bert Cooper
4
What play do Draper and Megan see?
1
How was Dr. Kevin Casey with severe OCD able/allowed to perform surgeries?