I have found on 9-gag this still: 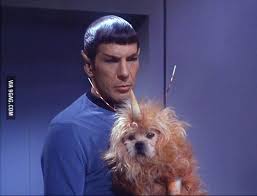 with Mr. Spock holding an "exotic animal" which is actually an annoyed dog in a unicorn-suit (sorta...).

From which episode is it? Unless it is a photoshopped image (can't really trust 9-gag...)

If you Google "Spock Unicorn Dog", it seems that this image is from episode called "The Enemy Within" (Season 1 Episode 5).

Scott assists in beaming a dog-like animal specimen from the planet, but he and the others are surprised when two identical creatures materialize - one completely docile and the other vicious.

First, after repairs are made, they try the experiment with a unicorn-dog, which was split into two when it was beamed up. One half of the unicorn-dog was peaceful, the other was snarling and biting.

Also, this image appears on a site called thegeektwins.com in a caption contest where it specifically notes the source of the image:

While the original Star Trek: The Original Series series had a lot of things going for it (a great cast, engaging characters, thought-provoking science-fiction, resonant themes), I don't think anyone would list "big budget" among them. Nowhere was it more evident than in "The Enemy Within," when an alien creature was depicted by a little dog in a fur coat and a horn.

Not the answer you're looking for? Browse other questions tagged identify-this-episode star-trek .