In the Episode 9 of Season 3 of Game of Thrones there's something I didn't understand.

Robb and his men go to the wedding of his uncle to one of Frey's daughter, but Frey and Roose Bolton betrays the Starks and after the wedding is done Frey commands his men to kill them.

But before the massacre happens, Catelyn seems to be suspicious of what is going to happen as Frey's starts telling about the "gift". Meanwhile Roose Bolton comes and sit near Catelyn, she then takes his sleeve a bit up and then slaps him, here's the screenshot of that scene: 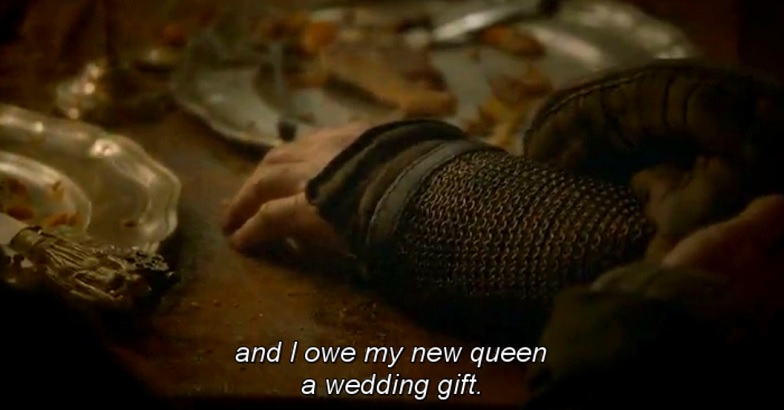 It is still unclear to me what did Catelyn see that she understood Bolton betrayed them. Any explanation please?

He was wearing a mail underneath, which is a battle clothing not for a marriage ceremony.

But her suspicion started when she notices Black Walder Rivers close the banquet hall doors and the musicians in the gallery begin playing "The Rains of Castamere"- the song commemorating House Lannister's decisive and brutal victory against the rebellious House Reyne of Castamere. Walder rises to make a toast to Robb, and Catelyn, seated beside Lord Roose Bolton, notices that the latter is wearing mail under his clothing. - GOT Wikia

TL;DR : Catelyn slapped Roose because she realized that they were about to be betrayed, and that Roose was a part of it. She knew this because he was wearing chainmail at the wedding.

One of the most sacred traditions in Westeros is that of "Guest Right", which is a sacred law protecting both hosts AND guests from hostility while staying at another's castle or home. Under this law, even the most hated of enemies dare not attack each other. The law works equally for host and guest, and is based on the honor system - anyone who breaks the right is almost guaranteed to be executed themselves by other Houses, since no one can trust a House that would break the right.

Catelyn was already suspicious of the invitation, given the circumstances. Her son Robb had blatantly disregarded his earlier pact with Walder Frey, and yet Frey still extended an invitation to attend his daughter's wedding. She reminded Robb of this very fact in episode S03E07 "The Bear and the Maiden Fair", yet Robb accepted since he believed that Frey would never break the law of Guest Right, especially over one "little" broken oath.

In the scene you describe, three things happen that tell Catelyn what's about to happen:

At that moment, Catelyn realizes that they are about to be betrayed, and it's obvious that Roose Bolton is part of it. With little else she can do, she slaps Bolton out of anger and then tries to warn Robb. Of course, it's all too late by that point.

Note: Also, it should be noted that - even as crazy as he was - Walder Frey could only be convinced to break Guest Right once he had the assurances of Tywin Lannister that nothing bad would happen to he or his family afterwards. He and Roose Bolton discuss this after the massacre. Of course, though, as we see later in S06E10... Tywin Lannister didn't count on

a vengeful Faceless-trained Arya Stark returning from the dead.

10
La Pianista - why did she break the girl's hand?
19
Did all of Robb's army come to the wedding?
3
Details on Roose Bolton's betrayal
4
What did Ned forbid?
2
Why did Remy show his chest when she asked him reason not to kill him?
7
How did the faceless man kept the intentions and memories of the one that suicided to keep Arya alive before she went blind?
13
What did Catelyn Stark expect her sister to do?
30
What exactly did Ant-Man see that made him say that their plan worked?
6
What did Marmee see in the man when she is volunteering?