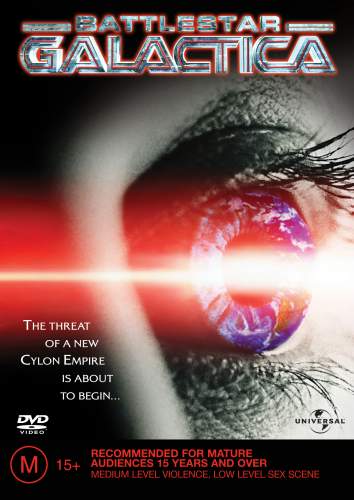 Then I noticed there is also a TV series with many seasons.

1. Are there other movies? If yes, how can I refer to this specific movie without creating confusion? (I mean, if I say "Battlestar Galactica movie" it probably won't suffice if there is more than one movie)

2. What would be the correct watch order between the movies and the TV series?

3. Does the fact that I already watched this movie spoil anything in the series? Or does it at least mess up the order? (I hope it doesn't)

Okay, so... Battlestar Galactica gets complicated because of all the miniseries and web series, etc. Netflix used to have the main series (minus one or two minor web series) and provided them in order, which made life so much easier. Sadly, Netflix took the modern BSG down, but you can still find DVDs at libraries, etc. So the answer to #2 is yes, there is a certain chronological order (though the web series aren't strictly necessary to watch, and they can be really hard to find). Technically speaking, there are two "movies" in this version (Ronald Moore & Gary Larson's remake), but they're really more of miniseries than anything else. That brings us to what you watched - if I'm recognizing the picture correctly, it's actually not either of the "movies," but the original/first miniseries (technically two episodes, but they can be watched in one sitting pretty easily) that served as a pilot for this remake of BSG. So you did good for yourself on that count - that original miniseries is pretty much essential to understanding the rest of the show.

So, you've watched the kick-off miniseries - now how should you proceed? The four main/regular seasons are a good start. Then there are the "movies"/miniseries. The first one, Razor, belongs in there shortly after the Pegasus storyline - you'll recognize it when you see it, but I don't want to give too much away. Then there's also The Plan, which shows you the first few episodes (original miniseries + a good chunk of season 1) directly from some of the cylons' perspectives. I personally didn't watch that until after I watched everything else - pretty safe spoiler-wise that way (I'd advise that you at least don't watch it until after you've watched the first season of the regular series).

As for the web series - there are three. The first, "The Resistance," is probably best watched during or just before Season 3. The other two - "Razor Flashbacks"* and "The Face of the Enemy" - are probably best watched once you're already well into Season 4. For a relatively spoiler-free account of season/episode/etc. order, you can look here. At least, it gives you the dates of when each episode, etc. was written and produced, and despite that it all looks like a jumbled mess when you put everything together, pretty much everything was written/produced in chronological order, so... I hope that was helpful. Good luck, and I hope you enjoy BSG!

(P.S. Caprica is also a fun spinoff of the series - it was cancelled after only one season, but it provides some interesting origin stories. So, if you like BSG after you've watched it, definitely go watch Caprica!)

*You may be able to watch this one earlier, especially as it's largely based in flashbacks to events from way before the series even started, but seeing as my memory is a bit foggy on those episodes, I don't want to give too much advice in that particular area.

Basically, everyone is going to their preference as to which order someone should watch any of these in. IMO it is generally best to watch Battlestar Galactica (as presented) first (as it was also created and released first), before venturing onto Caprica and Blood and Chrome just because I think the spin-offs would resonate better due to one key BSG character relating to both other series.

9
How did Starbuck come back?
9
Best order to watch the Underworld movie series
6
What is the best order to watch Batman animated movies?
12
Is the Reimagined Battlestar a reboot or a sequel to the Original Battlestar?
16
Do I have to watch Star Trek TV and movie series before watching Star Trek Beyond?
8
Is there any particular order in which one should watch the movies of Marvel Cinematic Universe? Why?
7
What is the correct watch order of Arrowverse in 2017?
5
How much of Downton Abbey (TV) should you watch to prepare for the movie?
3
In what order to watch the alien franchise?