Did the same dog play Einstein in Back to the Future I and II?

The question is self explanatory: did the same dog play Einstein in the first two Back to the Future movies?

The BTTF Blog article on Einstein indicates that the dog in the first film (Tiger) was replaced by a second dog (Freddie) for the second two installments:

In Back to the Future, Einstein was portrayed by a dog named Tiger, trained by animal trainer Richard Calkins. Twenty-eight dog years later, when Parts II and III of the trilogy were being filmed, animal trainer Matilda de Cagny provided another canine actor called Freddie, to portray Einstein (as Tiger was too old to continue the role). Freddie, alongside Christopher Lloyd, Thomas F. Wilson, and Darlene Vogel, also appeared in the film for Back to the Future: The Ride.

However, further investigation (prompted by Kristi Cos's answer below) and this article from the LA Times in 1986 strongly suggest that the original Einstein was played by two different dogs; Tiger, trained by Richard Calkins and another dog named O.J., trained by Bob Weatherwax. 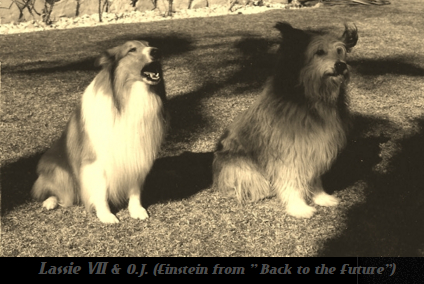 Notably, the owners for both of the dogs share a film credit as 'Animal Handlers'

No, the dog in the original Back to the Future was named O.J. I did a Tree Top apple juice commercial with him when I was 13.