In season 5 of Breaking Bad, it is shown that Walter and Jesse collaborate with a pest control company. They would cover the house with plastic and while Walter and Jesse would cook within it.

But the machines and units required which were being transported using boxes for musical instruments were so large and obviously heavy. How did they manage to assemble them so quickly without damaging or getting wrong connections or any sort of practical testing?

I mean one loose screw and you get a leakage. Air enters through the gap and spoil the batch.

Not just this, when did they clean the parts for residue and other stuff?

It only takes the fly episode to prove to viewers how pedantic Walt is with his procedure. Some people get the need for attention to detail, others don't. By the time S5 rolls around, we're comfortable with their cooking method (and know they're confident with it), so we focus on how they get away with it rather than how they manage to cook.

I am sure we are not shown the exact number of days/hours they remain in a house per cook. In addition, something that is done repetitively can be mastered fairly quickly so they must have practiced it in advance.

Whole House Fumigation for pest control is normally done between one and 7 days, as noted by the State of California. While I could not find something related to Residential Fumigation by the New Mexico state government, the state has a very tight licensing and control of pesticides for environmental and health/safety reasons. Fumigation times depends on the pesticides used, but for the most part,the up to a week is average throughout the country. Spot inspections of a fumigation site is not unknown (much like building or fire inspections, both scheduled and random), so while 2 weeks may be okay, anything more is pushing it, for both the Fumigators and the Meth lab. People start getting nosey eventually.

So 2 weeks time frame to set up, cook, and break down, without getting caught. Walt and Jesse were planning this, so it's not a spur of the moment thing. In S05E03 "Hazard Pay" Walt and Jesse go along with Saul to find a front to cook in. Walt is very precise about the failures of the other fronts. They would know what they need, and have it ready. They bought the front company, and gave the employees strict "Don't steal from these houses" rules. All the equipment was chosen for this. 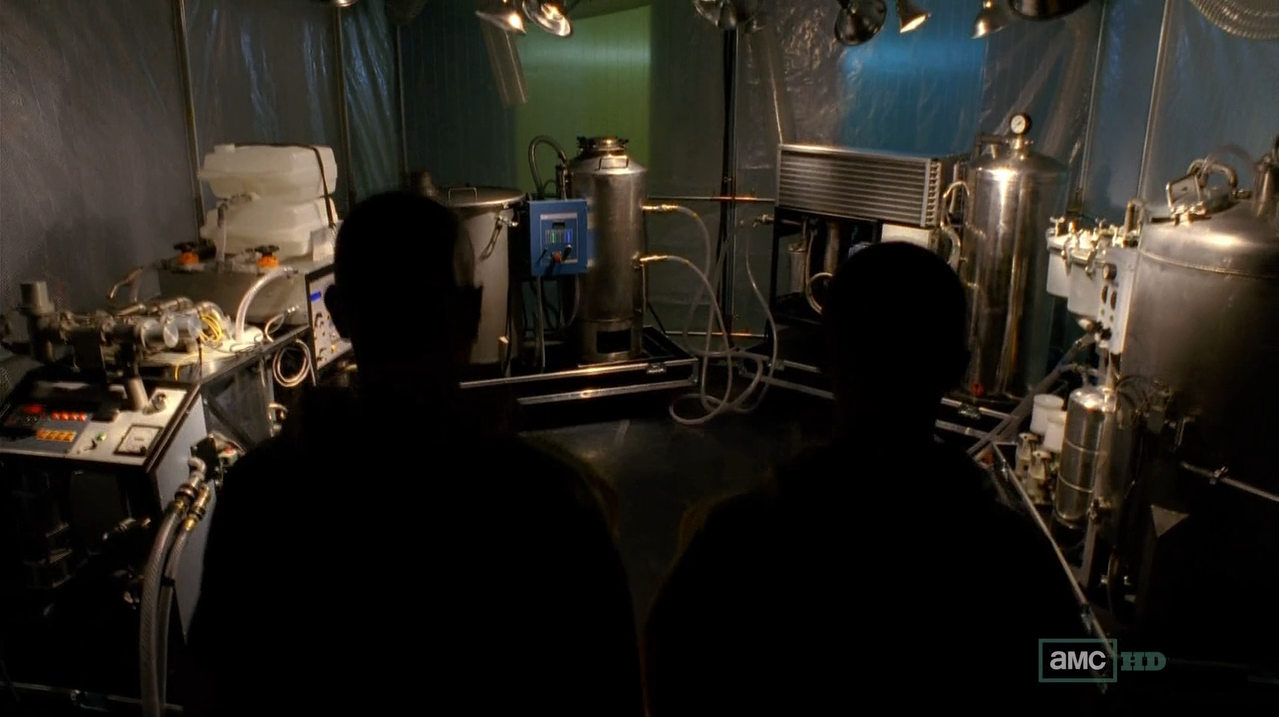 As you can see, it's not a lot of equipment. Most of it is self-contained with little external piping from one to another. Most of it is on wheels or carts. To me, that shows the lab is setup in such a way that it requires the least amount of connections to setup or break down. Odd ball, I say the setup only takes a couple of hours at most. As they are doing this about once a week, at random houses, they would not want something complicated that would take days to test before cooking.

While not explicitly shown, given Walter's attention to detail, the time preparing for this, and the danger of screwing up, it's more than likely that Walt had tested and designed the equipment before the first cook. The equipment is designed and simplified for the task at hand.