Was the set of "The Shining" intentionally set on fire by Kubrick to eliminate prop re-usage?

It is said Kubrick had a habit of destroying outtakes and any unwanted scenes, even destroying the Monolith in order to prevent the re-hashing of props in later movies. Could this fire that happened on the set of 'The Shining' be a cover story? It doesn't change much, but still kinda funny imagining Kubrick with a hint of pyro.

TL;DR: We will never know for sure, but it so highly unlikely.

Well... hate to break it to you but probably not. It is rather difficult to prove he didn't, and honestly it doesn't make sense to prove someone did not do something (burden of proof). Apart from proving from a legal view points, there are some thoughts that can shed some lights on the issue.

If I'm not wrong, the whole rumor started as a byproduct of another conspiracy; the infamous moon landing story. If you have been living in a cave for past few decades, this conspiracy suggests that Kubrick faked the Apollo 11 moon landing and left some hints in The Shining. This conspiracy has been pretty much debunked, hence, the idea of Kubrick burning the set of Shining to eliminate the evidence does not make any sense.

Another idea is that he did not want anyone to rebuild/rehash/reuse his "stuff". This might be true and it's well known that he was a bit eccentric. But it does not mean that he would commit to vandalism. A very expensive and dangerous vandalism. Mentalfloss says the fire has caused 2.5 million dollars of damage and according to Murray Close the official still photographer in this audio clip, it had been a very big fire that burnt two sound studios and threatened the third one (He is the photographer of the photo bellow). To me it is so unlikely that someone with a very basic level of intelligence would do such a thing (and Kubrick was quite intelligent!).

Furthermore, the aforementioned set was the Colorado Lounge. What about the rest? I mean, yes, some very memorable scenes of the movie happened in that set but about the rest? What would he achieve by burning a part of the set?

Irony: In the book, the hotel burns down (or explodes). Perhaps, this explains Kubrick's laughter in this photo, sitting on the ashes of a burned set: 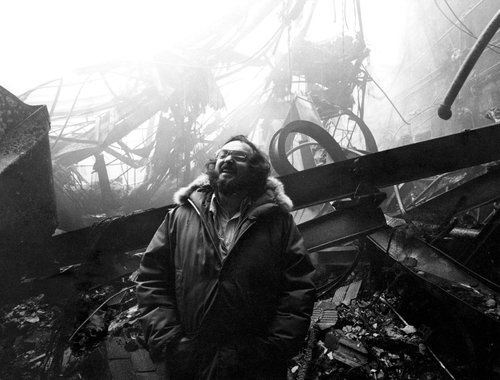 9
What was the original Robocop's suit prop made of?
17
Was the mistake in the opening scene of The Shining intentional?
28
Where is The Shining set?
6
Was the HBC (Hudson's Bay Company) mug a deliberate prop in "The Princess Bride"?