I was watching Tim Burton's Batman series and found out that Harvey Dent was played by a black man but he is played by a white guy in Nolan's series. What race is Harvey Dent portrayed as in the comics, and why the discrepancies?

They're both technically true, as each adaptation has its own official canon.

As for the portrayal of Harvey Dent in The Dark Knight, the character is in a different continuity than the Tim Burton/Joel Schumacher canon.

Harvey was white in the comics: 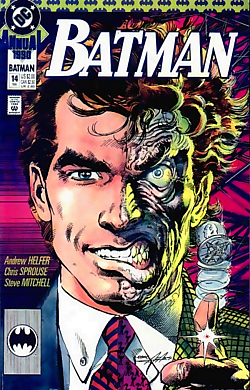 60
Did Batman break his one rule?
9
Why blame Batman for the crimes commited by Harvey Dent?
69
Why did the Joker take the risk of placing a gun in Harvey Dent's hand?
7
Why did filmmakers choose to portray Jack Napier as the murderer of Bruce Wayne's parents?
8
Where did the theory of Batman being a mob enforcer come from?
5
Why couldn't Harvey's killings be pinned on the Joker?
41
Who was the fifth one that was killed by Harvey Dent in The Dark Knight?
15
Did Nolan deliberately do the Joker fall scene in reverse to Burton's version?
5
What are the key differences between Christopher Nolan's batman character and Zack Snyder's batman character?
15
Is the way Thomas Wayne is portrayed in the "Joker (2019)" based on any comic reference?