When was the guests' evacuation in Jurassic World?

After the attack of the flying reptiles in Jurassic World, the guests seem to dissapear from the park (as do the flying reptiles). They mention a cruiseship (or ships) will pick them up at first dawn. A bit later they say it will arrive in 45 minutes.

However, the Indominus Rex was drawn by the crowd, due to their huge heat profile (smell makes more sense to me though). Yet the crowd is nowhere to be seen, and they do not seem to be hiding in the buildings near the control center otherwise they would've been attacked by the raptors. Furthermore, the kids probably would have been evacuated as well if the guests were evacuated.

Then again after the final battle the systems are shut down, which seems to suggest that everyone is already gone, but then why aren't the kids also evacuated, and why are some people still on the island at all.

So I wonder where the guests were during the final battle, and why the Indominus Rex is not trying to reach them instead of the few individuals near the control center.

Let us start at the beginning of the movie. This will provide context for what occurs later on, which is what you really asked about.

When the children get off the boat and step onto the pier, they are greeted by the site of a tram which takes them to the main concourse of the park:

They take this tram, you guessed it, to the main concourse. While there is no good, clear shot, this appears to arrive at the back end of the concourse as the very next scene shows passengers disembarking the tram and taking an escalator into one of the hotels.

This means that the dock is not by the main concourse nor by the hotels where the epic dinosaur battle at the end of the movie takes place.

After the Velociraptor chase scene, we see that everyone is evacuating. The staff in the control center are evacuating: we see Dr. Wu being told to leave, and the other staff packing up and getting ready to go.

The park guests appear to have been herded somewhere else:

While it is not very clear, this looks like it could be where the children got off the tram earlier and went into the hotel. There is a tram loading dock next to a very tall building that is likely to be a hotel.

This is also where we hear the announcement about the next ship leaving in 45 minutes.

This shot is clearly at night or at least evening, and occurs after the Velociraptor chase: even if some guests were evacuated, there were still quite a few left as the dinosaurs were making their way back to the main concourse.

Next, we see what appears to be a shot of somewhere inside, perhaps the foyer of a hotel. Looking carefully, there is a zig-zag wall on the right which matches the zig-zag exterior wall in the shot above. This seems to indicate that the guests are in the entrance of the hotel, waiting to take the tram to the dock. They are likely waiting until the ship arrives in order to avoid being out in the open with vicious carnivorous dinosaurs on the loose. 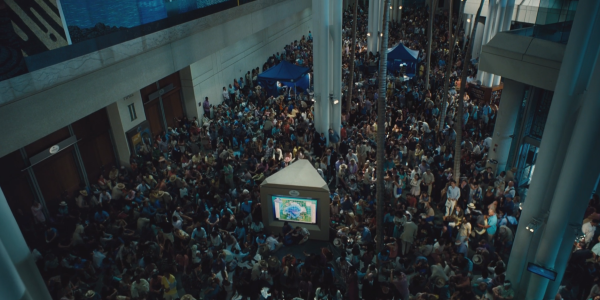 Based on the sequence of events, it appears that as soon as the pterodactyls attacked that the guests were being evacuated. However, that many people cannot fit on one or even two ships: it took multiple ships and multiple trips.

Yes, the Indominus Rex and the Velociraptors were loose during the evacuation and the crowd was not yet evacuated: basic logistics says there is not much to be done about that other than to try to get those ships going as quickly as possible and to contain the loose dinosaurs as quickly as possible.

However, there are two very important things to keep in mind about what the dinosaurs are up to and how the humans are reacting:

Once the fight is over, there are lot of guests recovering in what appears to be a hangar on the mainland (soldiers are keeping guard) the next morning. Clearly, a large number of guests must have been evacuated during the night.

She is standing on top of the roof of the control center, on the helipad, looking toward the main concourse; we can see the hotels and other buildings in the distance.

All screen shots are from the Blu-ray release of the movie. They are copyrighted by Universal Entertainment and used here under the fair use provision of the U.S. Code.

Gray: Can we stay with you?

Claire: I am never leaving you again!

When the hunt for Indominus started it was already night time, so there was enough time to evacuate the island. So either the island was evacuated and that's why Indominus went after them or the raptors were after Owen which in term led Indominus (part raptor) to them.

9
Why don't the visitors get moved into the hotel and visitors center?