I watched this TV series in the late 80s or maybe the early 90s, it was subbed in Arabic

Most likely it was American and it was not animated, I believe its from the same era of Small Wonder.

I don't remember that much about it but it involved a group of aliens who live among us secretly , they look just like us however I cant remember if they could shape-shift or not. One distinctive thing I remember is that they could jump very high (due to the different gravity) when nobody was looking since they are from an other planet.

There was at least two men and I think of them at least was working a police officer or something like that and he used his powers once to sort out problems/crimes when nobody was looking. Sadly that's all I can recall

Edit: I think I remember they had a massive ship in the outer space

Edit2: I have check all the shows mentioned in the answers and comments including V original miniseries, sadly it's none of them. I'll assume that my memory is bad and the show is not American nor in English. I don't think it's from the 80's most likely from the 90's

I wonder if you're after Galactica 1980, a spin-off of the original Battlestar Galactica that was cancelled after 10 episodes. Airing in 1980, it featured the Galactica crew members reaching modern day Earth and trying to blend in. They looked human, but some of them could leap to great heights because of the differences in gravity. There were also plenty of shots of their mothership in space.

All 10 episodes are currently on Youtube, if you want to check them out. Here's the intro:

you are thinking of Hard Time on Planet Earth

This sounds a lot like Alien Nation, which started in 1988. The human-like aliens do live among us, but they're out in the open, though there is also open discrimination against them. One of the aliens is a police officer and has a human partner. They can jump high, as I recall. Here's the IMDB page. 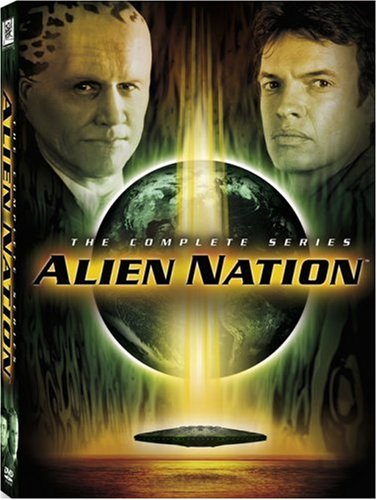 I'll toss in a guess though the police officer teamed up with an alien girl. She's humanoid and is trying to track down a xenomorph, a shape-shifting alien which escaped the prison ship on which she worked. He has been trying to find a serial killer~the escaped alien. The two of them visit the massive spacecraft in orbit during their pursuit.

Something Is Out There (1988 TV miniseries and series spinoff)

The series couldn't capture the feeling of the miniseries, which still holds up quite well. In some ways, it resembles "The Hidden" (1987). https://en.wikipedia.org/wiki/The_Hidden_(film)

This sounds like Earth: First Contact. The cop was human with alien organism/equipment on his arm. The aliens were distinct looking, and a season or two in, the main character that took over ended up being a hybrid with tri stand DNA.

Could it be Roswell it is an American science fiction television series, debuted on October 6, 1999. it was about a human/alien hybrids, sent here to complete their destiny, a destiny given to them by the members of their dying race, a race that they are someday destined to save

Could it be "3rd Rock From The Sun"? It started in 1996, but it is about aliens looking like humans.

A group of aliens has come to Earth to learn about its population, customs, etc. To avoid detection, they have taken on human form which gives them human emotions, physical needs etc. WITHOUT the understanding of what they mean or the inhibitions normally present in humans. Their leader takes the position of a college professor, their military expert as his sister, their intelligence expert, supposedly oldest of group takes form of his teenage son. The uninhibited reactions turn everyday events into unusual situations.

You are talking about The Invaders