Kung fu movie which ends by alien pierced on a pole and his blood is liquid metal? [closed]

I just remembered I saw a king-fu/martial arts movie when I was a kid (now I am 29) where the hero searches to uncover some secret and ends up accidentaly killing an alien, who looks like a human when the alien falls onto a pole.

In the ending scene, the alien's metal-like (silver, or golden) blood is escaping him and a human woman who loved him runs over and explains he was an alien and just wanted to go home on his spaceship.

There is something happening with the skies during the movie, can't really say what it was, hopefully some of you saw the movies when older and can recall more.

Any information, even if you don't know the name helps, thanks!

More details: I suspect the movie must have been from 90s, or 80s. Given its a Martial arts flick, it should be asian (not 100% sure though) and it might be a B movie.

Update 2: I found a guy looking for the same movie on the internet! Here is what he says:

Good day everyone. I'm searching for a movie, I think it's from around 80's years. I do remember the plot completely but just cant find the name.

Story revolves around a mysterious silver orb, which was kept in a Buddhist temple and stolen by a group. It was kind of a worshiping object to monks. After it was stolen, a young monk somehow gets close to the crooks that stole it and eventually they find the person who needed that orb. In the end it is revealed that orb is in fact a key to the alien ship and the mastermind is and alien himself stuck on earth for some reason. They almost kill him towards the end but he manages to fly away. Ship looks like a dragon from afar.

Plot takes place mostly in Tibet (I think) and few locations are in desert.

If I do recall, movie is in Korean, or at least some Asian language"

Movie gods have led me to remember significant detail - an orb / pearl, that was key to the alien ship, here is the movie: 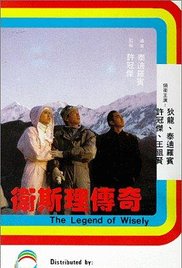 Wisely, the famous writer/adventurer, is tricked by his friend (played by Teddy Robin, the film's director) into helping him steal the dragon pearl. Samuel Hui plays Wisely in this big budget Hong Kong movie, with production units filming some scenes by the Great Pyramids, and many scenes in Nepal. There are car chases and crashes, chases by horsemen and plenty of fights along the way. The Legend of Wisely is a live action comic book. A lot of effort went into making this movie, and it shows as Wisely goes from one hazard to another, a Hong Kong version of Indiana Jones.