Why in “The Incredibles” is the usually-realistic gravity sometimes WAY too strong?

I'm a big fan of the Pixar movie The Incredibles. I especially love the animation. However, there's one point I've been wondering about: the strength of gravity.

Unlike some other styles of animation, Pixar tends to create physically-realistic motion, including how long things take to fall. However, in at least two sequences in The Incredibles, people fall at far too fast for reality. I'm wondering why, when the highly-professional studio virtually always gets it right, they seemed to get it way wrong here.

In the first case, Mr. Incredible konks a bad guy with a coconut (at about 58:38 on my copy), causing him to fall off of a platform:

The guy takes about a second to fall about ten meters, giving an acceleration of about 20m/s^2, or double gravity.

Another incident is more egregious. Here, Mr. Incredible drops Mirage after threatening her (at 1:23:17):

She takes about 1/4 second to fall about 2 meters, giving an acceleration of about 64 m/s^2, or six times gravity. (BTW, in converting the video to GIFs I messed up the frame rate, so the GIF durations are probably wrong.)

Unlike classic Warner Brothers cartoons, these aren't plot points where the breaking of physics entertains. And, not only is the physics wrong, but it just looks wrong, which leads me to wonder why Pixar did it that way. Given their overall excellence (how many Academy awards?) my best guess is that, for some other reason, high gravity generally makes the animations look somehow "good" (realistic, fun, exciting) and they didn't adjust it when something actually fell freely. Or, maybe it's just a mistake.

So, my question is: why did Pixar do this motion "wrong", where they spent so much effort doing it right elsewhere in the movie?

'Uncanny Valley' isn't really a problem unless you're really trying to go for perfect human representations with CGI. It's where 99% feels real but that 1% is off like a weird lip movement or something (ie Rogue One). In this case with Pixar stuff, they never aim for perfect reality so the 'Uncanny Valley' argument isn't necessary.

If you look at Toy Story, everything is pretty spot-on with how characters and objects interact with the environment. Woody's legs dangling like they should, things falling over like they should etc. Pixar have done an amazing job to recreate 'real-life' gravity in a hyper-reality world. This actually makes the 'breaking of the gravity rule' feel more dramatic and the same goes with The Incredibles. That's why I mean I think the change in gravity you noticed would be for dramatic reasons.

If you watch Madagascar, the characters are flipping and flying all over the place and the movie struggles to establish a gravity rule in that world (the big hippo jumps like, 3-4 metres into the air and into a pool). This is a totally fine creative choice but I think Pixar are amazing at making their films feel grounded by keeping their gravity rule consistent for most of the movie.

I could talk about this stuff forever so let me know if you need more info.

Because the standard rules of physics don't apply for an animated movie.

More technically, if an animator tries too hard to get the physics to perfectly mirror the real world, you end up in the uncanny valley. There's a blog post at Fast Company Design that touches on this topic a little, where they talk about Disney's 12 Principles of Animation created in the 1930's.

The goal of animation is not realism, but the illusion of realism. For example, in rotoscoping, you film an actor and then laboriously trace over the images to convert his or her movements into a living cartoon. But unless you constantly tweak what you're tracing for the medium of animation, the results look creepy. The lesson? The goal is not to make objects move as realistically as possible, but rather to make them move as fluidly as possible, regardless of realism. Good animation requires entirely different laws of physics.

Because exaggerated motion in the frame is what makes animation worth doing over live action in the first place.

In animation, jokes and visual gags are timed according to audience expectations and not the physical world. There is a sliding scale between letting your audience notice a joke before it happens and barely letting a gag register before showing the reaction:

Timing is very important for jokes, spoken and visual. Cartoons run at the speed of your brain, not at the speed of time. So I guess my question for you, regarding your two examples, is how did those two gags play with your expectations of what you thought would happen? This is the whole point of exaggerating motion, to surprise or heighten the audience's reaction or understanding.

This is my first answer and I hope I don't mess it up.

Pixar tends to create physically-realistic motion, including how long things take to fall. However, in at least two sequences in The Incredibles, people fall at far too fast for reality.

I disagree with this part, and I have strong evidence. Take for example, the Up movie. As far as I know, it defies most laws of physics and contrary to The Incredibles, it has very little respect for the gravity! But it was really fun to watch. Because when I am watching an animation, I expect fun and not reality.

Sometimes the reality is itself a way of adding fun. For example, those details in the furry animals of Monsters Inc. cost very much (you won't see such details in low-budget movies), but they totally worth it. It made them ridiculously believable, and I made a strong bond with them because of that. I hope you know what I'm saying ;)

So I think the makers of animation movies need to keep a balance between the reality and fun. And paying attention to all the laws of physics adds no more fun to the picture. The budget needed for an animation is typically higher than a real movie (Citation needed of course. I am talking about a few examples that I have checked). So if we want something to totally comply with the reality, why bother making an animation?

A world has rules and most of the time the animator follows these rules and in this case it's gravity. Pixar do a pretty good job at keeping the gravity rule constant throughout a movie but in this case with the incredibles, I'd say they broke this gravity rule for story-pacing reasons or for more visually dramatic reasons.

Gravity is fine - your calculations are wrong.

Now, I assume you're taking gravity as 9.8 m/s, so that makes those two falls only slightly faster than in reality, which can be put down to comic timing.

Although, remember that gravity doesn't have a fixed velocity, but instead has an acceleration - 9.8 m/s/s.

So I used this nifty little calculator, it said the first guy should take about 1.43 seconds to fall, and the second guy 0.78 seconds (based on a body mass for each of 70kg).

So they're moving faster than they should, but not as much as you thought. I'd say it's just comic timing.

Oh... and the first guy is probably dead.

You are putting something there that isn’t...they don’t speed it up for effect, instead they don’t draw it out for effect.

Making the times realistic isn’t necessary and is in fact distracting. It makes the scenes longer without doing anything but give the audience a chance to be distracted. Take the guy on the roof — once he starts falling off the roof it’s all over but the impact. He has no interaction with the rest of the universe until he hits the ground. If they make that take 2 second that is 2 seconds without plot, dramatic or character action.

It would in fact be entirely understandable if a non-animated movie did the same thing, cut frames in order to speed up the fall and get on to the next scene faster.

So I was curious about the math being flung around here, and decided to have a look at it. 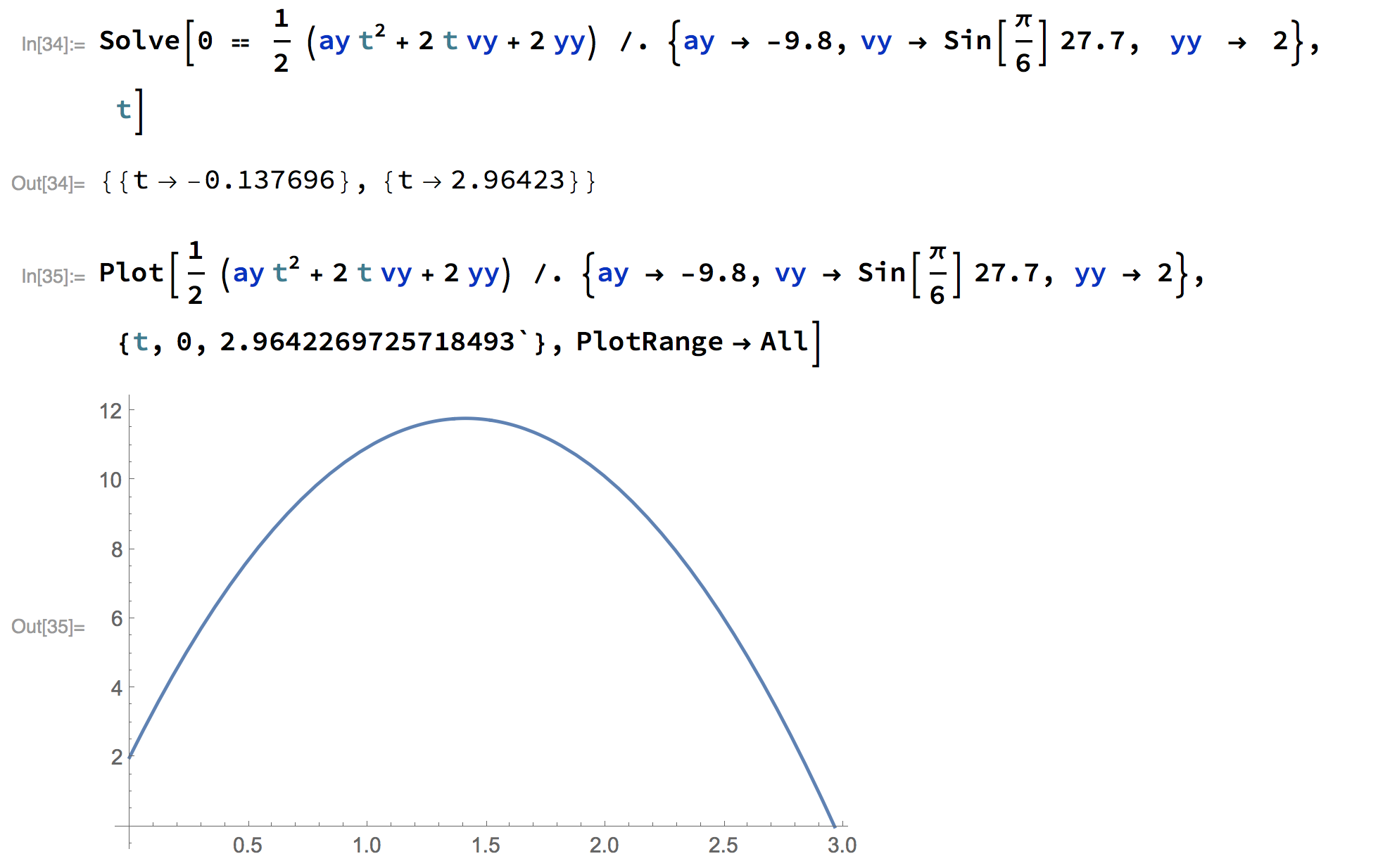 Using mathematica, and a standard angled throw equation, with some guesses, we can have a pretty good guess as to what's going on here.

First, I assume Mr. Incredible is 2 meters tall...He's probably taller, but the error of margin is negligible...

Solving for when the coconut is at the ground gives us a closed margin of where, and how far things are.

We can see it should take approx three seconds, throwing the coconut at 100km/h (27m/s) (Mr Incredible is apparently over 1500 times stronger than a man who can lift 100kg, benching 155tons (I assume imperial tonnes, ie 2200lbs), he could have likely vaporized the guy if he really threw the coconut...but I'm getting carried away)

Anyways, I watched the scene and in super scientific, clicking youtube videos repeatable for peer review fashion, I see it took 1 second for the coconut to arrive, Which means the solider guy was 10.95 metres above the ground.

Solving for that gives:

Giving us an acceleration at -22m/s^2

So, yeah, he definitely fell pretty fast. I won't bother solving for the girl, though, in reality she didn't fall 2 meters, she fell probably less than a metre, landing on high heels off balance and falling to the ground. (The speed of things falling on a curve can get quite fast! which probably makes it seem like she fell faster than it should be.)

Math aside however, I couldn't say why that particular scene seems to be so quick, compared to others, and if they're using some kind of rendering/physics engines, like in video games, and simulators, they wouldn't change the acceleration of things just for single scenes, if it wasn't intentional.

This concluding, they intentionally increased the acceleration for some kind of effect, as in other comments pointed out, changing physics for a specific kind of effect can make it more dramatic, or suspenseful, or even funny.

It wasn't a funny scene, nor a dramatic one (in comparison to the girl falling, which would also explain the changing of her falls acceleration), but it was an sneaking around action scene, changing the accel. here makes no contextual sense.

Thus it could be quite likely be a mistake or more likely to me. They just wanted it over quickly. Rendering time costs money.

The OP was correct in their comment in pointing out that the model of the coconut throw, assumes correct gravity, but a screwy fall. Which points further to the fact there is an intentional change in physics.

To delve further into the conspiracy, I have modelled friction, into the equation to find out if this is playing a roll of any kind.

The orange curve being with drag, blue without. Assuming a weigh of 600 grams and a coconut 300mm in diametre.

This reduces the accel. to -19.6843m/s^2. This with a correctly modelled coconut throw, giving us an incorrect fall.

Here we see quite a big difference between our two systems and how far the guard fell. Taking the maximum height of 4.84445m and solving for the accel. Gives what I expected:

A complete reversal of physics, and the expected acceleration. Uff, that's not good.

The OP seems to have simply stumbled onto the fact that gravity within the entire movie is actually twice that of reality in all scenes. Nice catch!

Not the answer you're looking for? Browse other questions tagged animation the-incredibles .