Eisenheim performs a sword illusion in The Illusionist (2006). Is this illusion realistic? Could it be practiced in real life?

Here is a YouTube video showing what I mean: 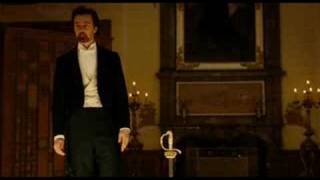 From an interview with writer and director Neil Burger:

Q: Several of the illusions that are shown in the film are based on real illusions from that time.

A: That's what I tried to do with the illusions. It is based on a short story, and it has some of the illusions in it. I used that as my point of departure.

Magicians at that time -- in a way it was kind of the highest performing art at the time because it was certainly the most popular -- were taking whatever was on the cutting edge of technology and adapting it to their performance. The sword illusion was based on electromagnetism; a general audience wouldn't have been familiar with the application of it.

How did it actually work? The magician who designed the trick, Ricky Jay, won't say:

When an actor or a director must know how an illusion works to accomplish the artistic goal, we gladly comply, but we abjure gratuitous exposure. Our intent is not to be coy but to uphold our belief that preserving secrets can help to excite and mystify an audience, whether the performance is on stage or screen.

Actor Ed Norton learned and performed the tricks for the movie, but I expect he was sworn to secrecy!

Well when you look at the attempts to move it, it clearly does move, but very difficultly. I would suspect that he put some sort of extremely strong electromagnet just under the floor. That way any metal objects that are close enough are held tight towards it (like how neodymium magnets are extremely difficult to pull apart).

It would be an electromagnet instead of a permanent one so that someone can turn it off on cue, (like they did).

Finally, it would have been designed to have a very strong strong magnetic field that falls off exponentially with distance so that it only affects thing ferromagnetic objects within a few inches so that the audience’s jewelery doesn’t suddenly come off and fly towards the stage (that would be a different show altogether). ;-)

My frustration with the entire film was figuring out the dividing line between what was plausible for an illustionist in ca. 1889, and what was merely film special effects. The added or more significant (IMHO) problem with the sword bit is, it seemed spontaneous - the prince challenged him apparently on the spot to do a trick "without the gadgetry" - and Eisenheimm quickly conjured the sword bit. Even if the electromagnetic meme was doable (in that era, and with that sword, etc.) wouldn't it have to have been set up ahead of time (it seemed to be in a royal ballroom, not at Eisenheimm's theatre or on a specially prepared stage; considering the suspicions and jealousies of the crown prince, wouldn't he or even the inspector have been snooping around to witness such preparations?). That seems the most implausible aspect of the trick. The other illusions did seem cinematic to a degree but were subtle enough that one could suspend disbelief.

Sword standing on its tip without support (The Illusionist Movie). How it is done (the easy way).

To perform the trick for the movie filming, all they had to do was have a strong invisible magicians string (available in most magic stores), with one end attached to the ceiling, with the lower end having a loop to hook around the sword handle. The length of the string would keep the sword vertical with the blade tip just touching the floor.

If you play back a video of the movie it is easy to see the string hanging effect of the sword as the sword sways a little.

The scenes of the various actors trying to move or remove the sword were shot with or without the string attached with each actor pretending to find it difficult to remove the sword.

No tools or special magnets needed to perform many magic tricks including this sword performance, all is just to hypnotize the audience and let their subconscious do the job, for example: 'none of you will be able to see me'

Not the answer you're looking for? Browse other questions tagged realism the-illusionist .

13
Was Inspector Uhl actually crazy?
23
How could Eisenheim achieve those reflections on the scene in that era?
7
Did Prince Leopold pull out the sword in a single attempt?
6
Does the music festival really exist?
7
How realistic is the depiction of court proceedings in Law & Order?
5
Is the microwave scene in Batman Returns realistic?
1
Would this be allowed to happen in real life?