What happened to the dinosaurs from Jurassic Park?

I went to Jurassic World last night and it left me with a question.

Jurassic world is on the same island (from the looks of it) as Jurassic Park so where did those other dinosaurs from the previous park go?

Also the evidence of it being on the same island:

In the beginning of The Lost World Hammond reveals to Malcolm that despite lysine contingency there is a flourishing population on the production facility on Isla Sorna (Site B) which was also abandoned after the park on Isla Nublar (Site A) was abandoned. This implies that the majority of animals on Isla Nublar must have died, some may have been eaten by predators like the rex, others may have had a very short life due to genetic failures in the first production batches (we see some failures in Jurassic Park III) and some may have been poisoned by eating the wrong plants like the triceratops in the first movie. Also there may not have been many dinosaurs in the park to begin with as Malcolm notes in the first movie and which would make sense if basic construction works were still ongoing in the park and the operations team was busy fixing dozens of software glitches. In the book there is a system which counts all dinosaurs using motion detection with an expected number of about 240 and worthy to note the dinosaurs have version numbers.

The scars on the rex in Jurassic World however imply that at least this one could be the one who fought the raptors in the first movie and that it was enough of a valuable asset and resilient to survive to be included in the in the new park on Isla Nublar. The website confirms this, thank you for the hint invalid_id: 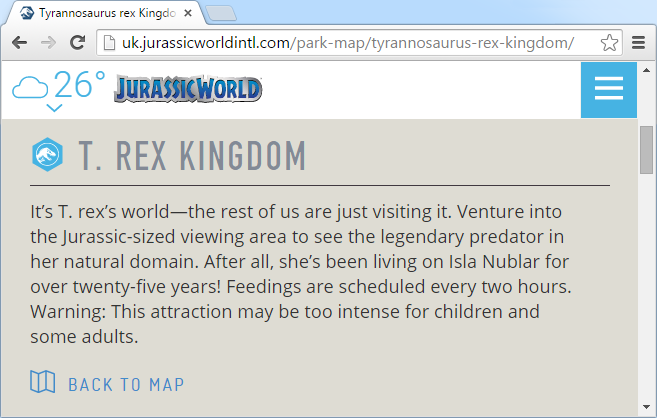 You may also remember that the rex and the baby rex from Isla Sorna were shipped back to Isla Sorna alive in The Lost World. Also Hammond didn't give the impression in his closing speech or anywhere else in the first two movies to dispose of the dinosaurs and in Jurassic Park III Isla Sorna is still isolated territory with no indication for planned bombings on one of the islands, which would probably have caused more costs and work than necessary if the new park was scheduled to open already in 2005.

If you only consider the movies (without deleted scenes) the writers of Jurassic World had more liberties to write a new screenplay that doesn't require a "reboot", but brings the story forward and it looks like that is what they did (and succeeded with).

The Jurassic Park Wiki gives some clues ... in The Lost World, for example, a deleted scene has a character saying:

And the VHS Box Set for The Lost World has text on the back that reads:

The dinosaurs are destroyed, the park is dismantled and the island is indefinitely closed for the public...

It seems clear, then, that between the first and second movies, all dinosaurs on the 1st island were completely destroyed and the island was abandoned until Masrani bought it and built his Jurassic World park there.

41
How did the T-Rex kill everyone on the boat?
2
How did they get The Indominus Rex DNA?
8
When was the guests' evacuation in Jurassic World?
4
Within the world of Jurassic Park, how much does it cost to create a dinosaur?
3
Why was the sound of an off-screen gunshot removed from a critical scene in a Magnum P.I. episode?
8
What happened to Robert Englund?
10
Why would being US Navy prepare someone to be a great velociraptor trainer?
14
What happened to other characters from previous movies of Jurassic Park in Jurassic World
1
Where did Katniss get another rope?
7
Why did they scrap the old park in Jurassic World?