Where did Ross sleep?

In Friends, when Ross moved in with Chandler and Joey, where was he sleeping? The apartment only had two rooms. Did he share a room with one of them?

This attractive floorplan, lovingly drawn by interior design expert Inaki Aliste Lizarralde shows that unless Ross is sharing a bed with Chandler (or sleeping in the bath), there's literally no place he could be sleeping other than the couch.

And if he was sleeping in the bath or with Chandler, it seems likely that it would have been mentioned at least once. 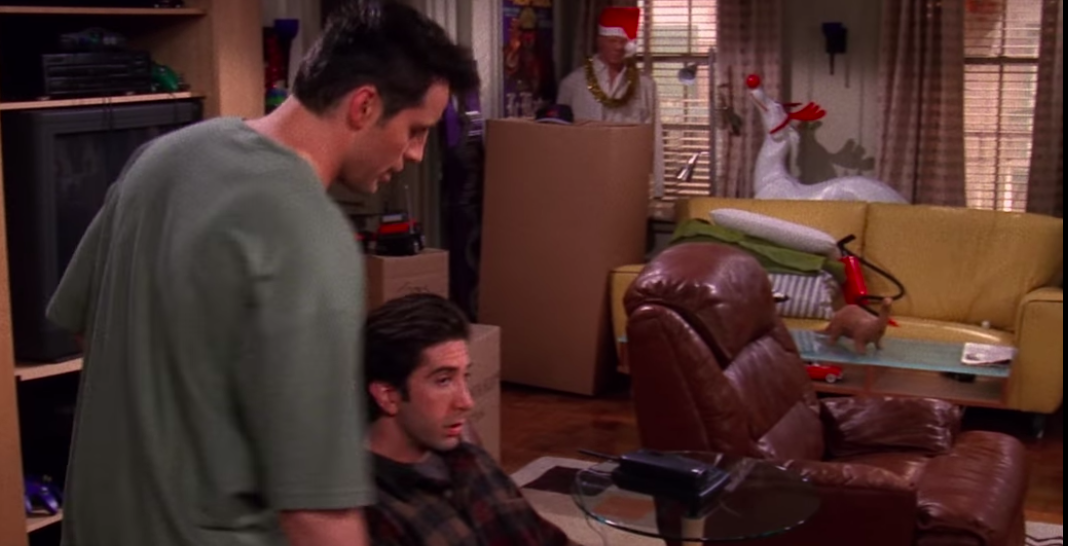 I believe he slept on the couch, because when Joey and Chandler sat down and talked about how they feel bad wanting to kick Ross out, you can see 2 blankets and a pillow resting on the arm chair in preparation for the night.

this is from the episode "The One Where Ross Moves In"

The couch does seem like the obvious place at first, but let's not forget that you can sleep on a recliner.

Sleeping in the bathroom is a very unlikely thing for Ross to do, specifically because we know that he is a clean and neat person, so the bathroom would be unsanitary for him to sleep in.

It is mentioned that along with the tons of stuff he brought with him, were things that other people would not consider a must have, such as an air purifier that Joey and Chandler make fun of.

With all that being said, and with Ross being the prepared and structured type of person, it is possible that he had an air mattress with him that he set up in the living room.

16
Why doesn't Joey move back to the bigger apartment in Friends?
30
Do the words 'Billy don't be a hero' mean anything to you?
4
What does Phoebe mean when she says “I bet they're doing it”
7
The “Ross-A-Tron” joke
4
Rachel Hat Scene
1
Bert and Ernie reference in Friends
27
Why is this funny: 'Ok, well, it’s definite, two more weeks of winter'
6
Did Joey get to live with Chandler and Monica?
9
When did Ross get his Ph.D.?