How did they film Danny tricycle riding through the hotel?

I am curious how the camera managed to maintain such a close distance to Danny riding his tricycle through the hotel in The Shining. The camera seems to be positioned on some wheeled cart that is trailing Danny while it is obvious that the tricycle is not pulling it (as there is a space gap). But the distance is usually very steady even though Danny is going pretty fast. How did they synchronize the positioning of the camera throughout each of, I believe, three rides that appear in the film? It is such phenomenal camera work, as though Danny had the camera on a selfie stick attached to the backrest of his tricycle but it's obvious that he didn't as there is clearance.

The Shining used the then newly-invented device called a Steadicam to shoot these (and many other) scenes:

This film was among the first half-dozen to use the newly developed Steadicam (after the 1976 films Bound for Glory, Marathon Man, and Rocky), and was Kubrick's first use of it. This is a stabilizing mount for a motion picture camera, which mechanically separates the operator's movement from the camera's, allowing smooth tracking shots while the operator is moving over an uneven surface. It essentially combines the stabilized steady footage of a regular mount with the fluidity and flexibility of a handheld camera.

So, apparently, the creator of the Steadicam, Garrett Brown, was hired by Kubrick to be one of the camera operators and his invention got pretty much one of its first uses on The Shining, particularly its ability to shoot low-angle shots.

The Shining (1980) pushed Brown's innovations even further, when director Stanley Kubrick requested that the camera shoot from barely above the floor. This prompted the innovation of a "low mode" bracket to mount the top of a camera to the bottom of an inverted post, which substantially increased the creative angles of the system, which previously could not go much lower than the operator's waist height. This low-mode concept remains the most important extension to the system since its inception.

These scenes, in particular, were shot with Brown sitting in a wheelchair, while holding the camera on the Steadicam rig: 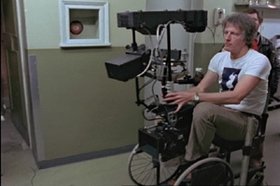 When Brown showed Kubrick that the Steadicam could shoot at a lens height from eighteen inches to waist-high, Kubrick was thrilled because much of the film revolved around a kid’s point of view. To film little Danny riding his Big Wheel through the halls, Brown rode on a wheelchair that Kubrick used for A Clockwork Orange.

Brown used the wheelchair because “in a number of instances it was the only way to get the lens right down to floor level.” Brown tried to follow Danny on foot, and got tired after three minutes. “I never even tried running after the kid, that would’ve been a joke,” Brown says. “A kid on a Big Wheel can go about seventy miles an hour.”

Not the answer you're looking for? Browse other questions tagged film-techniques cinematography the-shining .