What was the two guys' relationship in the suits? 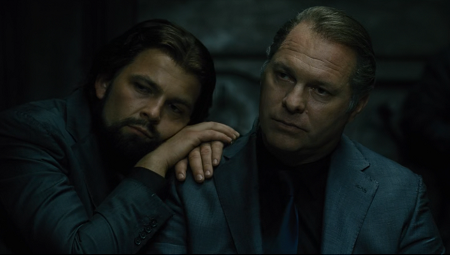 This interview with the film's Costume Designer (Catherine George) indicates that two characters; Franco the Elder and Franco the Younger were in fact brothers.

CG: Yes I imagine that he was some kind of enforcer or hit man. He certainly takes a long time to die. I had actually started looking at the images of assassins and brothers and looked at the Kray twins with their history of violence and their style. Director Bong really liked the idea of that violence and style coupled with love for his brother.

and from the movie script (registration required)

Suddenly, a spear flies in from out of nowhere and pierces Arabic Man’s chest. As he falls, another heavy spear flies through the air towards Curtis. At the last moment, Curtis deflects the spear with his axe blade.

Everyone turns and looks in the direction from which the spears came: the Franco Brothers.

Not the answer you're looking for? Browse other questions tagged character snowpiercer .

15
Who are the two stars in Avengers who support superheroes?
8
Why did they change the relationship between Hellboy and Liz Sherman?
9
Was Mike 'the Guy'?
11
Did Yona (Go Ah-sung) have supernatural/special powers in Snowpiercer?
13
Did Lord Baelish lie about his nickname?
5
What was Dalton Russell's point in the movie Inside Man?
6
Who are these three Justice League members during the fight with plant monsters?
8
Why does John Reese mostly wear a suit
5
Why didn't Vito kill those two guys?
4
What's the relationship between Thanos and Ronan?