What happened to the Dothraki loyal to Daenerys?

At the end of Game of Thrones season 1, the Dothraki were supposed to make a choice on whether or not to follow Daenerys. And in season 2, some of them made the choice to betray her, but I don't suppose all of them?

Now, in season 5, we see the Unsullied and the Second Sons, but not any Dothraki followers. Did I forget some part of the series maybe?

They are still around, but there were never that many of them to begin with, so they are fading into the background. In the screen shot below, form when Danaerys first arrives in Qarth, you can see the entire khalasar with her. 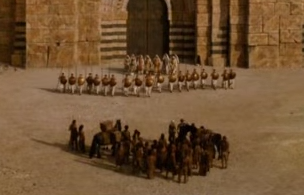 If you watch the recent scenes with Dany in them, you'll occasionally see a Dothraki extra mixed in, mostly in her Queen's Guard. But the number of Unsullied is far, far greater than the number of Dothraki around her, plus the others in Dany's "court" she's picked up along the way. So the Dothraki are just not that prominent.

The show is inconsistent with their numbers. Episode 7 of Season 2 she seemed to be down to a single Dothraki (Kovarro). She later has at least a couple of dozen when sailing for Astapor, later still she seems to have a couple of hundred after obtaining the unsullied army.

Either way they are small enough in number to not be considered either militarily or politically a significant force in Mereen.

She has about 35 or so that enter Mereen with her. I'm sure a few would have got killed in the Harpy insurgency but I think it would also be the case that there would be some Khal-unaffiliated Dothraki in the city serving as Guards, in the fighting pits, in the sellsword companies. There would also be some exile dothraki around, those who fled the destruction of a khalasar or having gotten on the wrong side of a Khal. The khalasar of Drogo broke up into several groups so word of Dany would have spread amongst the Dothraki. I'm sure some young men who could never hope to rise in status in some of the big khalasars might have decided to ride to Mereen to see her/join her. Her exploits in Qarth, Astapor etc would also have got back to the Dothraki Plains encouraging some to go join her. All in all it is reasonable to think as her legend grew some more Dothraki would have begun to join her even before the great conflagration taking out the Great Khals.

22
How do the Unsullied prioritize their orders?
19
What is the relationship between Daenerys, Viserys, and dragons?
23
Was Kraznys mo Nakloz naive to hand over the Unsullied to Daenerys?
7
Is he Daenerys' nephew?
6
How is the audience supposed to follow the story around Daenerys?
31
Why didn't Daenerys use the opportunity to attack this character?
10
Did Daenerys know how to hatch the dragon eggs?
9
How did Daenerys manage to turn up at King's Landing