In Swordfish, did they really fly a bus underneath a helicopter in downtown LA?

I just saw Swordfish (again) on late night TV, and got to wondering about that last major scene. John Travolta, Hugh Jackman and a bunch of hostages are riding in a bus on a downtown LA street, when a helicopter hovers over it and is attached to the bus with four cables. The bus is then lifted off the street and flown into downtown LA, crashing into a building or two, causing two of the cables to break off so it is hanging at a 90° angle.

I've always wondered how much of that was real (practical, as they say in the movies), and how much was CGI.

I ran across this picture which shows the bus being suspended by a crane, supposedly for one of the shots where it crashes into a building (I'm guessing the building in the picture is standing in for one 20 stories taller): 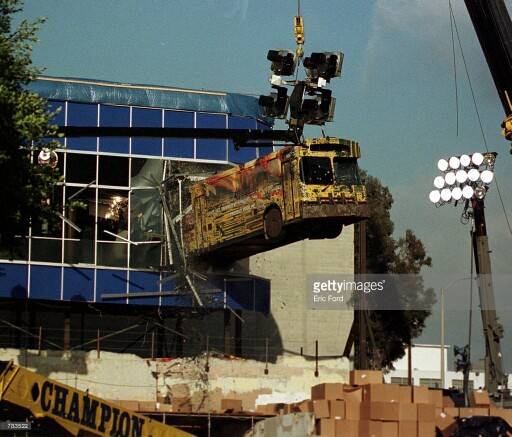 And the trivia for the movie at IMDb says:

The helicopter is a Sikorsky S-64 Skycrane (CH-54 Tarhe). It is now being used to fight bush fires across Australia.

So there was a real bus (with no people inside). And a real helicopter.

How much video of the helicopter and the bus flying in LA was real? Based on what I've dug up, I'm guessing when the bus is lifted off the street that was the real deal. But there are shots later when the helicopter and bus are flying quite close to buildings. Are those created from shots where it is flying out in the open? Or totally CGI?

I did some more digging, and unbelievably, it appears everything was actually real, except where they let the bus down on the rooftop (and the crash into the building was faked of course too, as per the photo in the question).

I found these Production Notes for Swordfish on this site, which included the following:

Jeff Mann, who collaborated with director Dominic Sena on Gone in 60 Seconds (2000) and many of his music videos and commercials, was instrumental in creating the film's finale - an incredible stunt involving a Sikorski helicopter and a bus full of hostages. "At the climax of the film, Gabriel has loaded the hostages on the bus and they are surrounded by SWAT teams," Mann explains. "There doesn't seem to be any way out. I envisioned a spectacular escape that Gabriel and his operatives would have planned months before. This massive sky crane appears like some huge insect and swoops down, plucking them off the ground and depositing them on the roof of a skyscraper. "

At the time Mann pitched the idea to Sena, they didn't know if it was actually feasible to do the scene physically. "When we started to do the research," says Mann, "we were taking a 7,000-pound liberty. "

Mann met with representatives from Erickson Sky Crane, a firm that specializes primarily in putting out fires, transporting lumber and positioning large air conditioning units on very tall buildings. To execute such tasks, the company designed a custom rig that counter-balances and stabilizes heavy equipment so it doesn't twist dangerously while being hoisted through the air.

After numerous discussions, the filmmakers decided that it was feasible to fly a bus through downtown L. A. using the special crane, but there were too many liabilities and insurance issues to set the bus down on an actual rooftop. After initially considering a graphic solution, it was decided it would be simpler to build a rooftop set.

Mann created an exact replica of a downtown rooftop and built it in the mountains above Chatsworth. One of the considerations in choosing the location was that they needed a clear vista looking west and south.

In order to pull off the unprecedented flying bus stunt, explains Boyd Shermis, "We did a pre-visualization of the bus's flight path by creating a very detailed version of the area, in a virtual sense, so we could literally put ourselves on top of any number of buildings along that pathway and know exactly what we were going to see and how we could place the cameras. "

Shermis placed a virtual camera on just about every rooftop along the bus's flight path and was able to give director Sena a range of options in terms of their positions and lenses. "There were legions of cameramen," says Sena. "It was sort of like Napoleon's army. We had 14 or 16 cameras shooting at a time. "

The day finally arrived and the filmmakers' dream became reality. The massive sky crane sat in a downtown parking lot as the crew looked on expectantly. As the rotor blades began to rotate, an ungodly noise filled the air and spectators covered their ears. The huge machine slowly rose and dust and debris filled the air. It hovered above the bus as the cables were attached. As it swept by base camp, a violent wind buffeted the onlookers and they turned away covering their faces trying to stay upright as the wind reached almost hurricane force.

"This thing would knock you to the ground and just hold you there," Sena notes with a laugh. "The rotors seemed to be about 80 feet across, and the rotor wash was devastating if you were under it. I made the mistake of doing that once as it was hovering to take off on North Hope, and it just sucked the breath out of my lungs. "

The following Sunday, the bus was hoisted up from the 1st Street Bridge and flown through the downtown streets of Los Angeles. It was lifted to building height, which is about 15 stories from street level, and traveled down the street in close proximity to the adjacent buildings, sometimes with a mere 40 inches on either side. Cameras were set on platforms on the edges of skyscrapers and as the sky crane made its turn, the bus swung in a curve within a few feet of the lens.

"This is a sequence that could have been done with CGI, but we felt it was important to actually do it live; nothing like this has ever been seen before, and that cutting-edge feeling was what we were after with this movie," Silver enthuses. "We wanted to make it bigger, better, more exciting and thrilling and give people a real wild ride. And if we've done that, then we've done our job. "

Safety was obviously the primary concern, and although the majority of the flying bus sequence was a physical effect, some elements were turned over to the visual effects team. There was a certain amount of blue screen work involved, mainly for the interior of the bus and the view from inside the bus. (In the story, the hostages are still inside the bus when it is airlifted through the canyons of the city. ) A blue screen was erected at the TWA hangar at Los Angeles International Airport to accommodate the huge set. The bus was hung 60 feet off the ground from a crane so it could swing free.

The interior shots presented a challenge for stunt coordinator and 2nd unit director Dan Bradley. "What I needed to do was to match the energy inside a bus flying throughout downtown L. A. in a hostage situation," Bradley relates. "We needed people to react in broader ways. " Bradley spent days working out the logistics with special effects coordinator Michael Meinardus.

One of the most important things to determine was how much weight the bus would hold. "We did test after test," says Bradley. "As the bus dropped, everybody goes weightless and we needed to create that effect. As the bus traveled through its arc, they got a lot of negative and positive G's, floating out of the seats, starting to crawl back. Then when it hit the bottom of the arc, they're turned upside down. It's very disorienting. "

I also found the following here which corroborates the above:

The scene with the helicopter putting the bus on the building was technically impossible as no building roof could hold that weight safely. So the crew built a set of the roof that was reinforced to hold the bus. The rest of the city was CGI inserted around it.

Very little of the bus/helicopter scene was CGI. The director insisted that a real helicopter be used that could handle the load. This made the crew and the pilot extremely nervous as the load was almost 80% of the helicopter's capacity. The stunt crew held firm on the scene where the bus crashes into a meeting however. That was completely CGI as the pilot insisted that it was way too dangerous to attempt it even with a fake building.

Not the answer you're looking for? Browse other questions tagged stunts swordfish .

4
Did Thomas Jefferson really shoot a man for treason?
74
Do they really crash super cars in action movies?
4
How did they film the motorcycle jump in Point Break (2015)?
247
How did they make cars fall apart in old movies?
61
Why did cars in 70s and 80s TV and movies slide like they were driving on ice?
18
Did Hugh Jackman really tattoo his own finger with a pen in The Fountain?