How does SGC know who is incoming before the stargate connects?

At the start of season 1, episode 19 - Solitudes of Stargate SG1, before the title credits, there is an incoming wormhole which for some reason destablizes and disconnects before the entire team gets through. However, before the connection is initially established, the following happens:

stargate is currently locking chevrons for an incoming connection

General Hammond: There's no one scheduled to come back for 24 hours, who is it?
Walter Harriman: It's SG-1's remote access code, Sir.

This occurs more frequently much later in the series but I always passed that off as Earth's military technology having improved over the duration of the show, however this is really early on and they haven't gained anything like that technology by this point.

How does SGC know who is incoming before the stargate connects?

There was a similar question posted on Science Fiction & Fantasy. Please note that there might be some spoilers in the question and/or the answer.

The answers suggest that there can be two possibilities:

The remote access code is provided through a device which one of the Stargate team members wears on their arm. After the wormhole is established, the team member punches in the access code, it is transmitted back through the wormhole, the SGC picks up the signal, verifies it's a valid code and which team it belongs to, then they open the iris on the gate. This isn't new technology, just a new use of Earth technology. The transmitter looks like this and is worn on the arm, usually Dr. Carter of the SG-1 team: 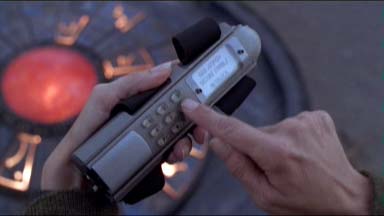 32
Why didn't they use a brute force method to activate the Stargate?
7
What are the known differences between the Stargate universe in the movie and the TV series?
5
Why is travelling through the Stargate from Earth such a bumpy ride?
12
What exactly is the stuff in the middle of the Stargate?
11
Is this map of the galaxy valid according to Stargate SG-1?
10
In Stargate movie how did they manage to activate the gate in alien world Abydos?
19
In Stargate, what has happened to the children in the pyramid?
5
What were the production reasons behind S05E19 of "Stargate: Atlantis"?
3
Which episodes did the Furlings sketch in the "200" episode of Stargate SG-1 pull stock footage from?
16
Is there mention of any of the modern gods in "Stargate SG-1"?