Near the end of Fantastic Mr. Fox, and just after the film's climax, Mr. Fox, Ash, Kristofferson and Kylie encounter a wolf. Like the scene, the wolf seemingly came randomly and out of nowhere (with Mr. Fox remarking about that). The encounter ends with Mr. Fox remarking "What a beautiful creature", referring to the wolf, and tells his companions to wish the wolf, good luck. 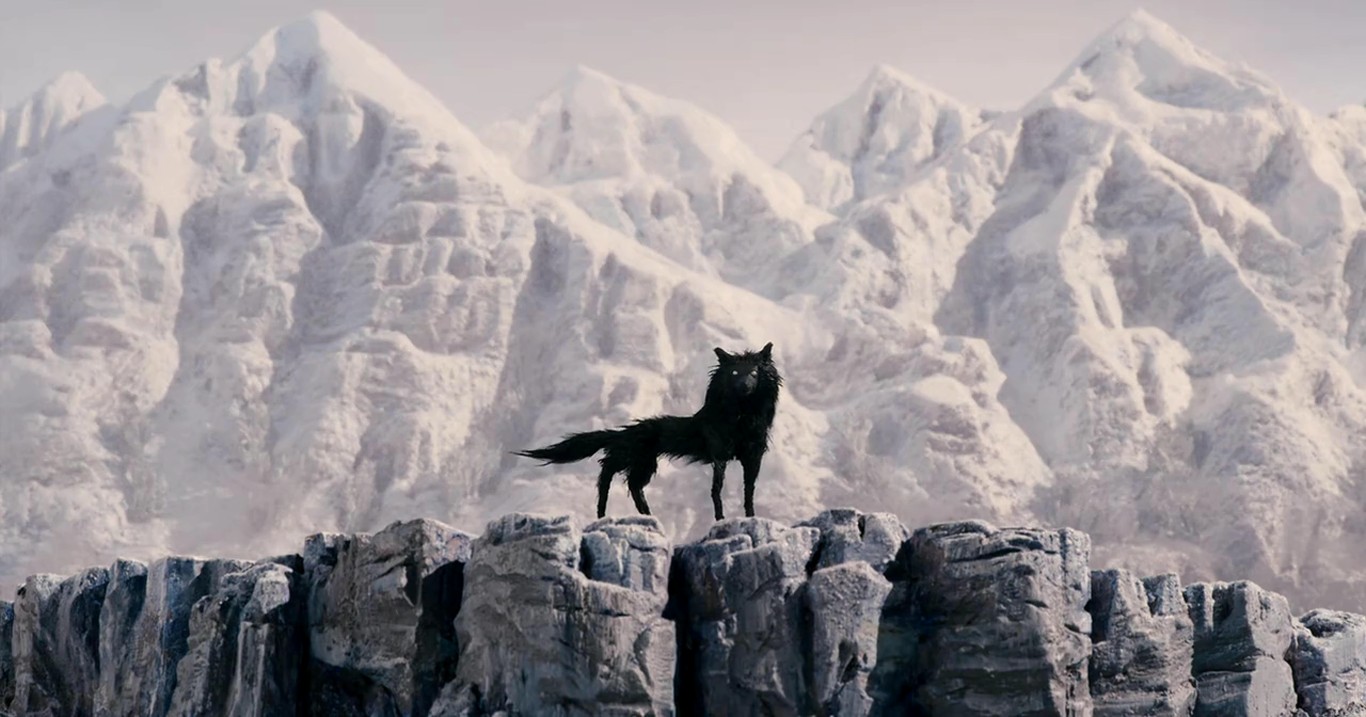 Mr. Fox has claimed that he has a phobia of wolves (but he is not "scared" of them). Related part of the movie script:

KYLIE
Are you scared of wolves?

KYLIE
Well, I have a thing about thunder!

He also mentions that he has a phobia of wolves to the wolf.

Besides that (being a "phobia" of Mr. Fox'), does the wolf symbolize something else in the film? What does Mr. Fox mean when he said that he's not scared of wolves but has a phobia of them? What is the significance of this scene where Mr. Fox meets the wolf?

I should also point out that unlike the other animals in the film, the wolf is not wearing clothes, is not standing upright, and never spoke.

There were some people who didn’t like the wolf scene. In particular one very important person. And he said, I don’t understand what this scene is doing in the movie. And I would always say to him, I’m not cutting it. That scene is why I’m making the movie.

So what does it mean?

Actor Jason Schwartzman, who plays a 12-year-old fox in the film, said:

...we stop and we see a wolf on a distant hill, and it’s a really beautiful, beautiful scene. It’s like so heart-warming because it’s just a beautiful moment between these foxes and little animals and this really like mysterious wolf who we’ve heard about the entire movie and who doesn’t talk in this scene and he’s not wearing clothes. He’s kind of, he represents I guess, the wild. He’s a wild wolf and animal, and it’s a beautiful moment where they have this great connection, and in that moment, it really like to me the point of that scene is let’s keep on being free. Let’s keep on being animals. And it’s such an uplifting moment, and like when I’ve seen it with audiences, a bunch of people break into huge cheers and hooting. It’s such an awesome, awesome scene. It really just blows my mind.

I think it shows that Mr Fox is afraid of his wild side and yet desires greatly to live it due to fears that he has become domesticated. The wolf represents pure, unbridled, rugged and wild power. Mr Fox tries to communicate with it but realises that being wild is not for him and is best left to the wolf. He exchanges a symbol of brotherhood with the wolf and returns to his family and community while the wolf returns to its harsh forest, not needing a thing in the world, being truly free.

And finally, this article by Shana Mlawski talks about the scene in the context of the plot, suggesting that the movie is about castration. Mr. Fox has had his tail shot off and he is trying to get it back, at the same time that he is trying to revert to his wild nature from the domesticated life he had taken on in in order to support his family. An excerpt:

The ambiguity of Mr. Fox’s decision to give into his natural, wild impulses can also be seen in his relationship with the Wolf. Throughout the film, Mr. Fox shows that he is afraid of the Wolf. “Wolf? Where?!” Fox says, cowering with eyes wide open. The Wolf is described as the wildest, most frightening, and yet most beautiful creature in the world. Mr. Fox fears the Wolf and yet wants to be exactly like him. We can thus say that Mr. Fox fears pure, wild masculinity yet also yearns to own it himself.

After Mr. Fox and Ash save Kristofferson and Mr. Fox’s ruined tail, Mr. Fox actually does meet the Wolf, his masculine ideal. Significantly, Mr. Fox cannot speak with him. The Wolf, being the representation of pure wildness, cannot speak English (or French, or even Latin—which is important, because it means that Wolf cannot even understand his own “scientific” or “natural” name, which is of course as culturally-determined as the names “Wolf” and “Mr. Fox”). Mr. Fox does pump his fist at the Wolf to say, “Fight the Man,” but that is all Fox can do. His wife is pregnant again; he cannot live in the wild world of the manly wolves. He can only learn to survive his neutered life in the suburbs.

The review continues on, assessing the moral of the story – a very interesting read about the male midlife crisis.

I could agree with the above review about the wolf being a representation of the wild.

I guess the explanation is that Mr. Fox is already living in the forest/suburbs and is tightly connected with a civilized small animal world and human world. His talents lie in being good in this environment, yet he also loves his wild side, as he repeats several times during the movie "I am a wild animal". References to the wolf are made just so you understand the scene at the end. It could have been anything else that symbolyses wilderness - eagle, wolverine, bear etc.

Eventually when Mr. Fox meets the wolf, the whole scene is him realizing that he is not that wild after all. He almost gets his eyes teary due to this realization, he is not a pure animal after all. At the end of the scene Mr. Fox seemingly copes with this idea. The idea is again enforced at the very end when Mr. Fox gives a speech about living in the suburbs.

The underlying story is probably the one of humans (normal humans) often yearning to be more natural, our instinctive love of wilderness, yet we have to live with the reality that we may sometimes rejoin the nature, but we still have to return to our daily homes, our society etc. Sort of a bittersweet idea, since it is about growth of a character and it doesn't take some tragedy to change.

(P.S. Also as a lawyer I loved the badger. He's very typical. Serious, desires leadership, helpful and a bit whacky outside his immediate field of work (demolitions expert haha).)

What is being forgotten is that Mr. Fox et al are not animals. They are human beings presented as animals, they talk wear clothes have neuroses they are clearly human and possess uniquely human attributes. So the meeting with the wolf is between a human and something related to humanity. This something understands no earthly language and is beyond a seemingly impassable barrier, it responds to only the most basic yet profound symbolism. It struck me as a communication between the mundane aspects of humanity and the deepest mysterious origins of consciousness......

During the film we see the Mr fox and the way he lives. The main important thing in the Mr fox’s life is the contrast between the domesticated side and the wild side which is controlled by a pure instinct. In the wild side the meaning of life is totaly different from the domesticated side. In fact following the new life even for human being made the Mr fox to forget the wild side, but after a while this seems empty and thats why he decided to start again to live in the way that he suppose to live, the way that nature wants him to live not his wife. In the Wolfe scene we see that in the highest moment of Mr fox’s life and after his victory against the domesticated side, a wolfe which is the symbole of a pure instinct in nature appears in the top of a hill. Not wearing dress for the wolf is a symbole to show that this animal is still living only based on its instinct. When the Mr fox is watching the Wolf he weeps for a second. He probably miss all pure leanings that are transfered to him by instinct and now he can not have them just becuase he left the wild and accepted to live like a domesticated animals. That the main point, the contrast between instinct and the new life in the cities.

Guys, we humans started to live 3 million years ago. Comparing more that 2.99 million years living in nature, the new lifestyle is strange and new. Thats why for most of the people this is empty.

This is amazing that the Mr fox can not make a connection with his language, and seems the wolf doesn't understand what he is saying. but when he raise his hand it like the Wolfe know what does he mean and answers to him clearly. this Wolfe is the lost side of every creature in earth, the side that we truly belong to the side that is formed during thousands of years. fro me my instinct remember me the memory of life i nature, hunting and dying in gross

Though just a short filler as many of the views have been posted but I recall that Mr. Fox stresses the hard winter ahead for the wolf yet up until this meeting with the Wolf and further is still a hard struggle for them. Therefore the fact that being animals is a hard life, but throughout the whole movie: animals act as humans but are in fact animals. Mr. Fox even stresses this fact at the dinner toast which was first rudely interrupted by humans. All I can say is what a beautiful clash between humans and animals for freedom.

Not the answer you're looking for? Browse other questions tagged analysis wes-anderson fantastic-mr-fox .