How much of Interstellar is based on real effects? [closed]

When I watched the movie Interstellar, I felt that there was a lot of use of real events, real calculations and real experiment. I then found out that the director, Christopher Nolan, passed 4 years of studies about galaxies, wormholes and space before he began working on his movie.

What are the realistic things that the Interstellar movie used?

realism interstellar
Share
Improve this question
edited May 7 '15 at 14:13

For starters you need to consider that "real science" when people talk about Interstellar is still largely "speculative-albeit-imaginable science". While we can get spaceships off the surface of our planet, we're hardly flying manned missions into deep space any time soon. With this in mind, any "real" science is mostly theoretic when it comes to deep space travel.

There's actually a book on this subject, written as a companion to the movie by Kip Thorne called The Science of Interstellar which does a good job of splitting science reality from science fiction - but ultimately while Christopher Nolan apparently did his homework, when a choice came up between "scientifically accurate" and "awesome to look at", the latter won.

Take this example from the io9 article on Interstellar, this is the difference between the black hole in the movie and what the black hole would have looked like if they'd paid attention to the physics, rather than the pretty: 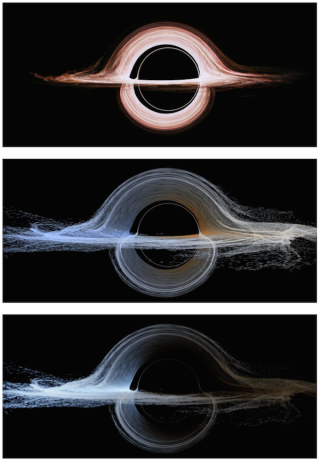 The first image shows what Thorne and his co-authors describe as a "moderately realistic" accretion disk, the gyre of matter that orbits some black holes, and appears here to wrap over and under a spherical hole in spacetime.

The second and third images show what the accretion disk would look like, given the increasingly intense color-changing effects of Doppler and gravitational frequency shifts. (I'm simplifying, but these shifts characterize how light moving quickly toward and away from an observer affect the perceived color and intensity of that light.) The third and final image (which I've enlarged, below), write Thorne and his colleagues "is what the disk would truly look like to an observer near the black hole."

This isn't the only obvious issue, either. Take a few of these examples: