Why did they use Head & Shoulders to fight the alien invaders in Evolution?

Please tell me the reason behind using Head & Shoulders Shampoo in the movie Evolution (2001).

plot-explanation evolution
Share
Improve this question
edited May 5 '15 at 12:19

One of the ingredients in Head & Shoulders is selenium, an element on the periodic table.

Ignoring the fact that a great number of elements on the periodic table are toxic to humans, the film decided to pick arsenic off of the table and then made this leap of scientific logic:

Humans are carbon-based life-forms, and if arsenic is toxic to us, the "scientists" in the film use the periodic table to decide that the alien life-forms, which are nitrogen-based, must similarly find selenium toxic: 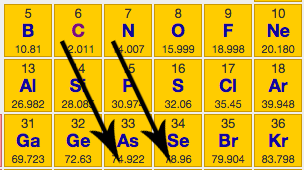 I think the film is ridiculous and haven't seen it in years but this is the one thing I remember about the film.

Here's a reference (and the source of the image) if you want it:

David Duchovny, much by chance and luck discovers that since humans are carbon based and arsenic is deadly to humans, the aliens are nitrogen based and so if you follow the same pattern (2 down 1 over) on the periodic table, the aliens should have a deadly reaction to selenium (which apparently is found in conditioner).

And from the Wikipedia article:

Looking at the positions of nitrogen and carbon on the periodic table, Ira theorizes selenium might be poisonous to the aliens, since they are nitrogen-based, as arsenic is poisonous to Earth's carbon life. Ira's dumbest students Deke and Danny (Ethan Suplee and Michael Ray Bower) recall selenium sulfide is the active ingredient in Head & Shoulders, so the team procures a firetruck and fills it with the shampoo. Ira also gives the Donald brothers an A, much to their excitement.

Not the answer you're looking for? Browse other questions tagged plot-explanation evolution .

35
How/Why did Tyler Durden got shot in the head?
13
Why does Walter use Lily Of The Valley instead of ricin?
2
Why did they wait until after the report?
19
Why did Joy give Sadness the core memories?
6
Why are the emotions colored in the way they are?
15
Why do people bleed in real world when they are hurt or killed in The Matrix?
6
Why did the alien invaders let Russell Casse go?
5
Why did Karl's father go to switzerland in the movie “The Boy in the Striped Pyjamas”
4
Why would an advanced alien use a subway train to get into the city?
2
Why does the head of the NPA or L have to show themselves on TV just because the second Kira asked them to?