On their U.S. release date, what time of day are movies first shown?

When a date is provided for a US release, does it mean it will be released first thing that morning (matinee) or evening?

This really depends on the film.

The average film that doesn't get a hyped release will show its first screenings, generally between 10 am and 12 pm (noon), whenever the theater opens and schedules the screenings.

The new blockbuster release, though, generally includes screenings at midnight on Thursday night (assuming the release date is set for Friday).

The only restriction is that the film can't be shown before its specific release date (usually a Friday)... usually... that seems to be changing of late.

In the industry's ever increasing need to extend their opening weekend box office numbers, screenings have started to spill over into Thursday evenings.

For example, with Avengers: The Age of Ultron it has screenings on Thursday, April 30th (official release date May 1st) as early as 4 pm (the earliest in the image below are for 7 pm but there are some at 4 farther down the page if it shows you the same info)! 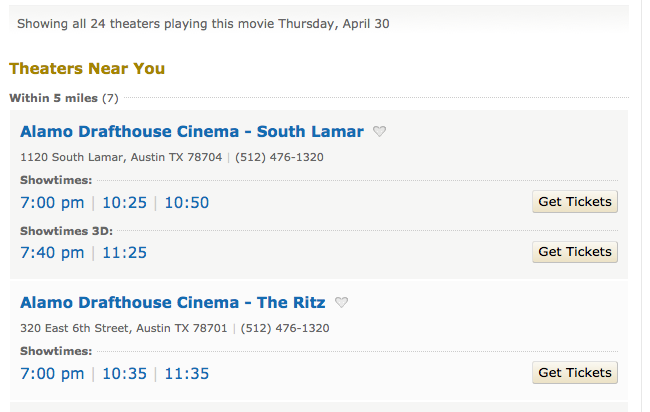 Theater employee here. I worked in the projection booth of my local theater from 2007 to 2011, and currently help out with marketing efforts since 2013. I'm friends with two GMs for the chain I work for and work aquaintences with a third, so I've had lots of observations and discussions in this area.

The typical release day for movies in the US is on Friday. Weekends play big in the US, with lots of people looking to go out and do something. Summer this is especially true as kids are out of school, and there are usually no big sporting events going on. Fall is different because Friday nights are usually used for high school football in most cities, but movies will still generally come out on Fridays.

The first showings on Friday can typically happen as early as 10AM, maybe sooner, but this can change depending on the time of the year. Summer you'll usually see 10AM screenings, but they may be for movies that have been out for a while, or they may be for the newest movie(s) to come out that week. Weekdays they may start a little closer to noon, especially during the school year. Showtimes are determined by a contract agreement between the corporate office for the theater chain and the studio releasing the film. They agree to how many showings each day for the next week, and sometimes for how many weeks a movie will run as a bare minimum, with the option to extend of the theater wishes. The rates each entity gets as far as ticket sales are also negotiated. Newer digital projectors actually give studios the ability to limit how early and late a given film can be started, and even how many times it can be run during the day.

However, sometimes this typical release day will change, and for certain reasons.

The next typical release day for a movie is a Wednesday. This is usually used when:

Even then, some movies have released on Tuesdays, Thursdays, even Mondays. These are a lot rarer in the US, but they do happen, and often for the same reasons cited above.

As Catija points out, sometimes movies have show times the Thursday evening before the Friday they're officially premiering on. This isn't moving the release date up, they're simply seen as early screenings, and are generally not counted in the opening weekend gross. Even midnight screenings are usually not tallied in the opening weekend gross, and are often considered as a separate metric with its own rankings.

The reason for early releases, as in before midnight of the official day of release, is a bit manifold.

The release date for movies varies. Over the last 30 years-most were released on Wednesdays, with official release dates set for Friday. Star Wars movies got a 12:01am showing, with all other movies released here in Missorui/KC area getting a mantinee showtime at 10:05am(Theaters open at 10 or 11 out here). If a movie is actually held til Friday release, the first showing again is at the opening of the theater-10/11am.

To answer your question, it is always the earliest in the day that the movie is released. 12:01 am when they were open the night before, or 10:00 am when they open for the new day.

4
History of show times prior to release date

8
Why is international distribution so tangled even for recent movies released first online?
17
Why is Independence Day: Resurgence not released on July 4th?
4
How do they decide Blu-ray/DVD release date?
0
Limited Release or Select Theaters
10
Was the Indian animated movie Swami Ayyappan ever released?
21
Was the timing of It's release deliberate or coincidental?
4
History of show times prior to release date
15
What do film dates with Roman numerals after the year mean on IMDB?