I'm hoping someone can help me identify the following film that I would have seen in the early 90's or late 80's. It is a film in the era of Weird Science, Flight of the Navigator and Explorers.

All I really remember is that some American teens build a science project which seems to be able to control time or manipulate time. Different characters from different time periods are brought into their own.

One scene I remember which I think is towards the end of the film involves the teens going into their school or university to where this device is located. When they get to the main hall the area has been transformed into a Jurassic jungle environment complete with dinosaurs.

One other very random clip I remember is a scene whereby a bunch of Hells Angels style bikers arrive or are summoned by this device ( I'm hoping this isn't bleed-through from another film...)

... After Michael and his friends plug it into a power source, it begins to materialize objects from other times and dimensions.

When his science teacher (Dennis Hopper) experiments by plugging the orb directly into the power grid, it starts a chain reaction that warp the dimensions and time around it. Past, present and future collide in a whirling vortex which engulfs the school and only Michael and his friends can stop it. 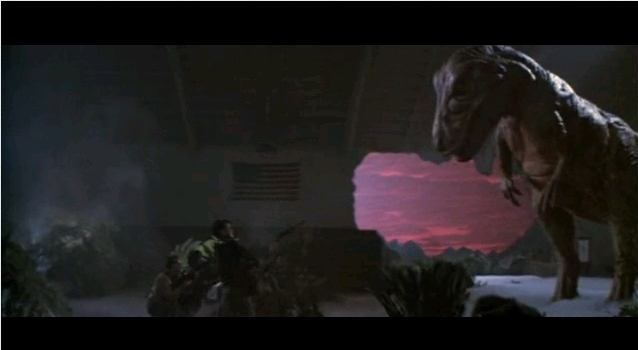 Well, it doesn't really seem right, but it could be Bill and Ted's Excellent Adventure.

Bill & Ted's Excellent Adventure is a 1989 American science fiction comedy buddy film and the first film in the Bill & Ted franchise in which two metalhead slackers travel through time to assemble a menagerie of historical figures for their high school history presentation.[2]