Who are the statues at the Gates of Argonath?

In Lord Of the Rings, when paddling down the river Anduin the fellowship pass by two statues, one on each side of the river, both holding their left hand forward. One is in armour and is bearded and carries a sword. The other is cloaked. Aragorn calls them "the Kings of old" but do we actually know which kings they are? They looked to me a lot like Elendil and Isildur.

I think it's Argonath you are talking about. Also known as The Gates of Argonath or The Pillars of Kings. The names of they are Isildur and Anárion.

Isildur was the High King of Gondor and Arnor. He also cut the One Ring from Sauron's hand. Anárion is the brother of Isildur. Both ruled together a part of Gondor.

The Argonath, also known as The Gates of Argonath or The Pillars of Kings, is a monument comprising two enormous statues carved in the likenesses of Isildur and Anárion, standing upon either side of the River Anduin at the northern approach to Nen Hithoel. It marked the northern border of Gondor, as nearby down south were previous outposts, the Amon Hen and the Amon Lhaw.

More information can be found for example here or here. Or you google 'lord of the rings two statues'. It was not hard to find ;-)

One another important thing:

Unlike in the book, in the movie the Argonath appears to portray Isildur and his father Elendil (shown holding a sword, not an axe, as portrayed during the film's prologue) 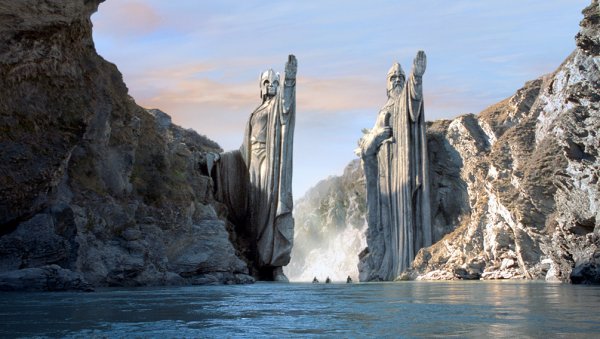 Not the answer you're looking for? Browse other questions tagged character the-lord-of-the-rings the-fellowship-of-the-ring .

4
Who is the Lady of the Wood, and what's her relationship to the rest of the elves?
11
Who is speaking when Gandalf uses the Black Speech?
19
When does Gandalf realise that Bilbo's ring is the One Ring?
5
Why didn't the Lord of the Rings Trilogy just release the Extended Versions in the theater?
4
Who closed the gates of the Lonely Mountain with stones while Smaug was inside?
13
Are elves in Middle Earth mortal or immortal?
11
How does Gollum enter the mines of Moria
11
Why didn't Gimli know the password to enter Moria?
30
What initially awakened the Balrog?