Words on the screen in John Wick

In John Wick we see that some words that are said in English are written on the screen in different colors. Did they have any special meaning? Like if we place those words (e.g. the blue ones) next to each other will we get a sentence that should have a meaning or something?

I can't find any articles that have found hidden meaning (in terms of word re-arrangement) for John Wick's impressive subtitle typography, but I did find and article from a website called Videomaker from 2015, discussing new innovations for film subtitles by using typography techniques. The article includes what this does for John Wick.

The limitations of older subtitling tools are no longer a restraint for editors. As a result, editors can use their graphics packages to apply the rules of typography to their subtitles. It can be as simple as sizing and placing the text on screen so it doesn’t interfere with the mise-en-scene of imagery, or instead plays with it. This is a technique often used in title sequences that utilize shot footage. Along with the placement of type, the editor can change the size of their text, even varying the size of words within a phrase to place emphasis. In this a way, a viewer who is watching without the sound, or who is unfamiliar with the spoken language of the film, will know what words carry the most meaning. It’s also a way to highlight an actor’s dynamic performance. This technique was done for the subtitles of the 2004 Denzel Washington film, “Man on Fire.”

Typography wields great power, and the use of various letterforms imparts meaning upon the words they represent. A simple font choice can change the way an audience interprets what they read. Choosing the right font for any given message is not a task to be taken lightly, and it’s one that should always be considered. The 2014 Keanu Reeves film, “John Wick,” used varying typefaces to impart meaning on its subtitles and to place emphasis on certain words. It was done not only by changing the typeface used, but the color and styling of the chosen words were changed to stand out as well. The resulting type is closer to what is found in the graphic design of posters and magazine covers than what is normally experienced when reading subtitles. 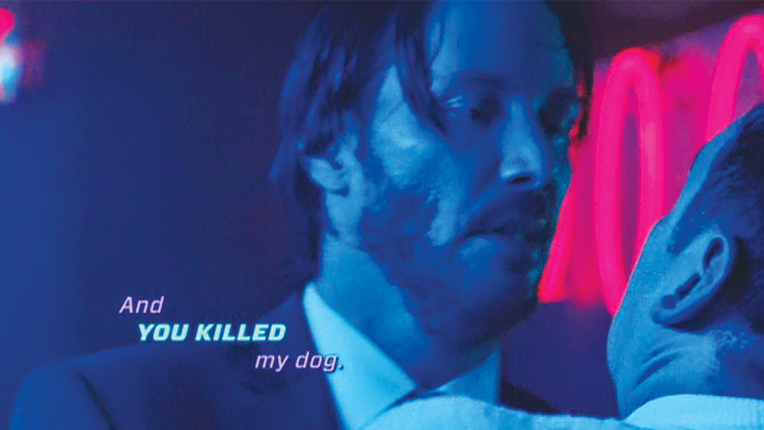 The different colors, size, and font, allow for word "emphasis" and help establish personality and tone, not unlike a graphic novel.

Even that idea of "poster and magazine covers", adds an additional pulpy-pop or nightclub disco/rave element that feeds into John Wick's neo-nior style, reminding viewers of trash-glam periodicals and serving as a bridge between aesthetic and dialogue, but also ultimately adding a new kind of visual layer.

14
What is the purpose of the specialized subtitles during "The Boogeyman" song?

14
What are the coins John Wick is using?
8
Is there some deep significance to Dharma Initiative Station's logos?
27
Cop scene explanation from John Wick (2014)
8
Do I need to watch the first John Wick to understand John Wick 2?
11
John Wick asking for laundry
14
What is the purpose of the specialized subtitles during "The Boogeyman" song?
43
Why is the number '4' so prominent in the Death Note?
4
Is Jason Isaacs in John Wick?
1
What is the more accurate translation for this scene in the series Kingdom?