In one of the most memorable jokes from Seinfeld, Elaine dances at a company party in "The Little Kicks" (S8E4), and again briefly in "The Slicer" (S9E7). 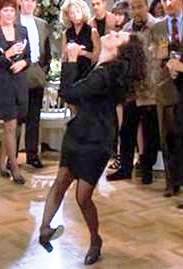 Has Julia Louis-Dreyfus ever discussed how the dance came about? Was there input from Larry David or any of the cast members? What inspired her dance moves?

It was reported in Allure magazine that the dance moves Elaine made were completely Lorne Michaels (noted Saturday+Night+Live producer) own moves.

[I debated whether to post this elaboration as a comment but it would've been way too long, so I'll just add it as an answer instead if that's OK.]

In the years since the Q&A were posted, a book called Seinfeldia: How a Show About Nothing Changed Everything was published which contains the full origin story of Elaine's dance (and an excerpt of which is available here on Yahoo Entertainment).

Elaine's dance was invented by Seinfeld writer Spike Feresten (who indeed based it on the awkward dance moves of his former SNL boss Lorne Michaels), and he taught Julia Louis-Dreyfus how to perfect them on set:

Among the ideas [Feresten] pitched in his first season [on Seinfeld] was one based on his time as a receptionist at Saturday Night Live. During his first year in show business, the legendary SNL creator Lorne Michaels was his boss. Feresten had idolized Michaels, and now he found himself down the hall from the man. [...]

Feresten found that aside from answering the main phone line in the office, another of his duties was to man the door at the Saturday Night Live afterparties. As he stood at the door late one Saturday, he spotted his boss dancing. What he saw, as he later told me, was Lorne Michaels dancing as if he’d never seen another human dance before. The man heaved and gyrated to a rhythm only he could feel. [...] At that moment, Feresten realized Michaels was just another nerdy guy. It endeared Feresten’s idol to him and allowed him to look his boss in the eye with confidence.

In Feresten’s eighth-season Seinfeld episode “The Little Kicks,” [...] Feresten even got to give Louis-Dreyfus a little dance lesson during production, schooling her in the singular Michaels method.

As for Dreyfus herself, she talked about it a couple of times. Here's a clip from a 92Y interview where she talks about her discovery at the early age of 3 of how screwing up a dance can make people laugh, and suggests (in jest) that it may have contributed to Elaine's choreography later on:

And in this recent Vanity Fair interview, Julia seemingly (but not necessarily) contradicts the Lorne Michaels story by saying that the night before the table read for the episode, she 'auditioned' several bad dance moves in front of the mirror and then for her mom and husband, and went with the dance move they picked.

22
What happened to Syrio, the Dance Master?
3
Was the Winter Soldier inspired by Sky High?
8
Which original character was Kramer's stuttering inspired from?
18
What was the inspiration for the names "Vandelay Industries" and "Art Vandelay"?
12
What was Newman's first name?
2
What tied the show Seinfeld to the East Village?
7
What is the classification for Kramer's unfiltered, honest character?
4
Was Leonard Hofstadter's character inspired from George Costanza's character?
8
What is the meaning/usefulness of this exchange in Seinfeld's The Limo?
6
Is Arthur's dance a medical condition?