Why the Angels and not the Dodgers in The Naked Gun?

This question has plagued me since I was a kid.

The culminating scene at the end of The Naked Gun takes place at a baseball stadium, purported to be occupied by the California Angels. 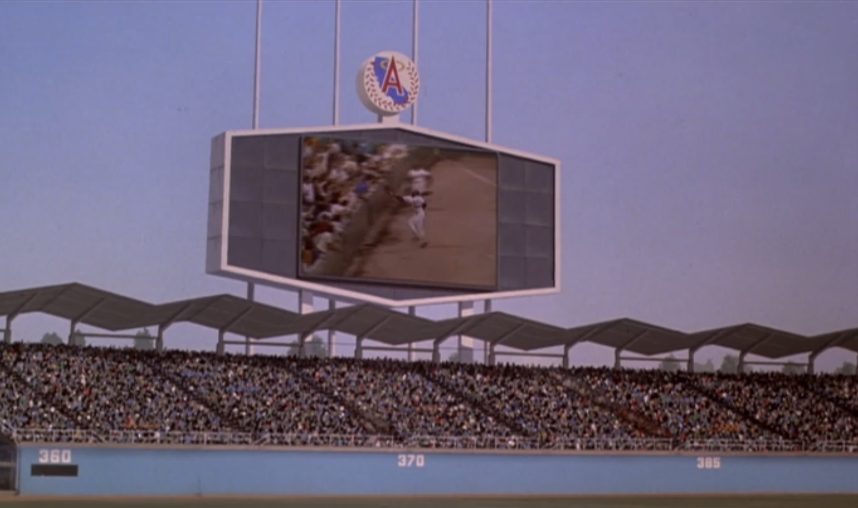 But that stadium is, without question, Chavez Ravine-- more commonly referred to as Dodger Stadium. 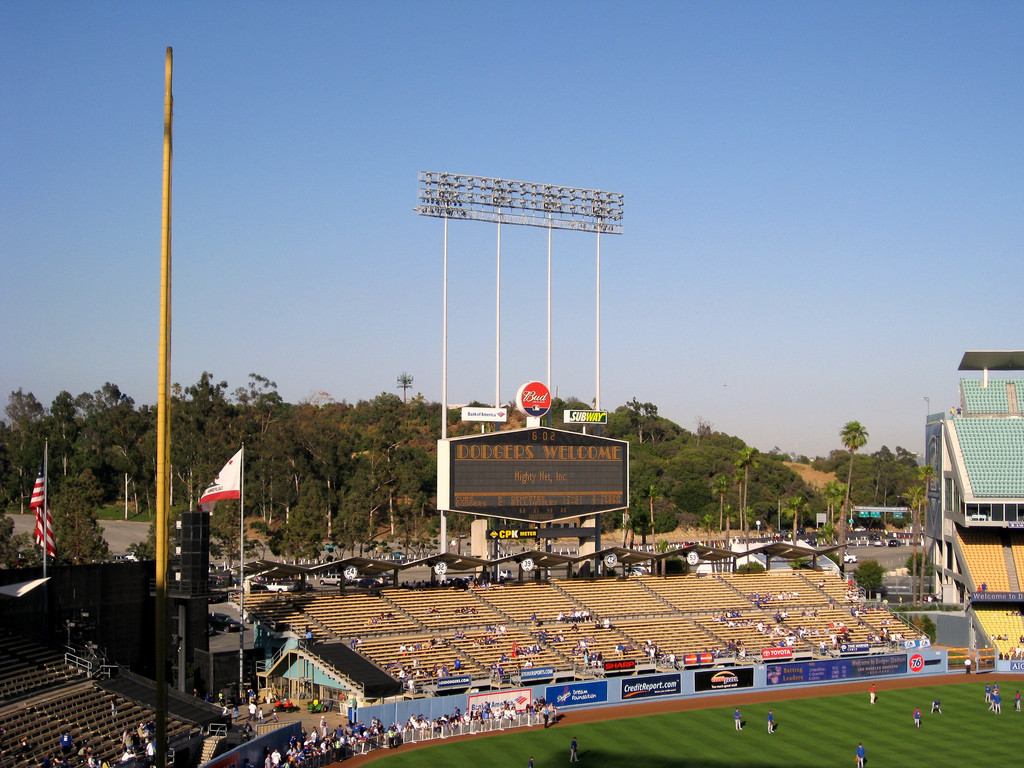 Left-center field in a screenshot from the movie: 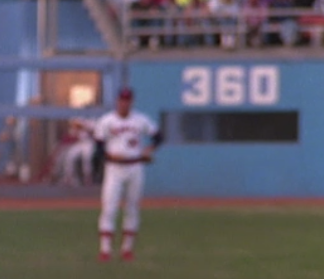 ...and the most damning are the 395 signs to the left and right of dead-center: 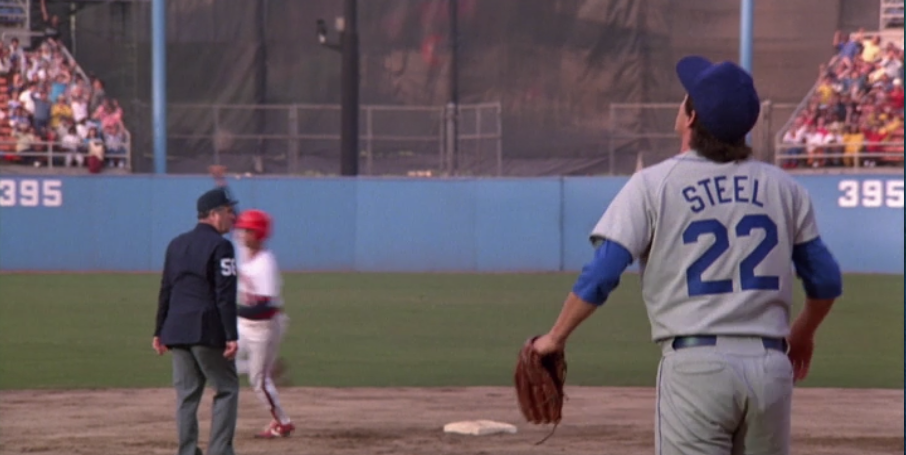 Dimensions are backed up on the wiki for Dodger Stadium here.

The Naked Gun clearly was filmed at Dodger Stadium, not Anaheim Stadium (what it was called in 1988, the year the film was produced). So why are the Angels featured, and not the Dodgers?

Note: Part of me suspects it's related to the Dodgers winning the World Series in 1988, but can't find any evidence to support that.

First off, it's definitely Dodger Stadium. The Wikipedia page for the stadium even states that:

The baseball scenes from the first Naked Gun film were filmed at Dodger Stadium, although the team represented in the film was the California Angels. (The Angels played their first few seasons at "Chavez Ravine" while Angels Stadium was being built.)

The parenthetical phrase is correct, the Angels did play at Dodger Stadium but only from 1962-1965, which is well before the film's release date of 1988.

And there's a note on the film's Wikipedia page that also states it was shot at Dodger Stadium:

Although the film's climax takes place at a California Angels home game, the baseball scenes were filmed in Los Angeles, at Dodger Stadium.

Now, here's what I think the reasoning could have been for shooting at Dodger Stadium:

Dodger Stadium is only used for baseball.

The expansion was completed in time for the 1980 NFL season, and the Rams played in Anaheim Stadium from then until their move to St. Louis after the 1994 season.

My conjecture is that, because Anaheim was home to the Rams, it's likely the stadium was in use during the filming of the movie so was not available for the shoot, while the Angels themselves, were.

Another possibility is that, because Angel stadium is owned by the City of Anaheim, it's possible that the city refused to allow filming to occur in the stadium.

Dodger stadium is owned by the Dodgers rather than by Los Angeles itself... so they may have been willing to let the film pay to use the location.

Now, the most tenuous guesses for last... Why not the Dodgers?

First, the players on the teams on the field aren't really the teams they're claiming anyway. The trivia section on IMDb (super trustworthy, right???) says this:

Reggie Jackson is depicted as an outfielder for the California Angels and Jay Johnstone is depicted as a player for the Seattle Mariners. Though both are legit former major league players, both had been retired by the time this movie was released. Jackson retired as an Oakland A's (his original team) in 1987 and Johnstone had retired as a Los Angeles Dodger in 1985.

So, there was at least one Dodger on the field.

I'm guessing that most of the "teams" in the film are made up of retired and minor league players. If you compare the photo you posted above with the player Steel to the Mariner's roster for 1988, there's no such player on the team.

So, that leaves the team logos.

It's possible that The Angels gave them a better price for using their logos than The Dodgers did... and this could be related to their World Series win but I think it's unlikely... the film was released December 2nd and the series finished October 20th. I'm not sure what the turnaround time from shooting to screening was in that era but I'm pretty sure it wasn't two and a half months.

It's also possible that this entire film is a farce (because it is) and this is supposed to be one of the elements of that.

In theatre, a farce is a comedy that aims at entertaining the audience through situations that are highly exaggerated, extravagant, and thus improbable.

That's not as satisfying but I wouldn't put it past them to do it on purpose.

MLB would only agree to Angels and Mariners for this type of film and these types of uses. And it was a royal pain in the ass getting them to agree to use ANY teams. The trade-off was the Mariners had to be featured also, since that was a recent expansion team and was struggling. With that, then they were free to use real team gear, which was unusual at the time for a spoof film production. But the Mariners were struggling with ticket sales etc, and so the production for NG actually made some trades with MLB whereby they purchased a vast quantity of MARINERS season tickets, which ended up with charities etc, because they were MARINER season tickets, not Angels season tickets. nobody really cared about Mariners tickets in LA. Bottom line, it was all MLB's call, and at the beginning of the shoot, Production was told MLB would never go for the project...but alas....they did.

Not the answer you're looking for? Browse other questions tagged production the-naked-gun .

2
Why was Not Safe for Work repremiered as Clipaholics?
13
What is meaning of movie title “The Naked Gun”?
4
Why is there a delay between the news anchor and the reporter on location?
4
Why were the Doctor Who opening scenes and music changed between seasons and not between Doctors?
19
Why do movies in theaters not have recaps?
10
Why are portraits of David Crockett and Sam Houston on the wall in Naked Gun?
3
Why did they pick Lacrosse and not football?
11
Was Jennifer Aniston really naked in front of the Friends audience?
54
Why do old gun fight scenes sound so weird and cartoonish?
0
Why was Sense8 made as a series and not a feature film?