Does Bollywood title their movies using the Latin alphabet or the Devanagari alphabet?

A coworker recommended a movie, Dilwale Dulhania Le Jayenge. I had thought that spelling it in Latin might have been a kindness to me. However, it is very easily googled with that string, and I see many images and posters with the title spelled out that way. Wikipedia says that the language is Hindi, and that the official alphabet is Devanagari.

Once I managed to figure out how, I finally stumbled upon what I believe is the correct form in that alphabet: दिलवाले दुल्हनिया ले जायेंगे.

Watching through the movie gives no clues... the opening credits aren't just written in the Latin alphabet, they're in English (executive producer, director, etc), and yet the dialogue isn't.

What is the canonical form of a Bollywood movie's title?

Most Bollywood films are titled in Latin letters... that I can tell.

Every DVD box cover and poster I've ever seen for the films has been in Latin script, as you mention.

I found this question and answer on another site that I think you'll find interesting:

One reason is that applications for title approvals have to be filed in the Latin alphabet. So you have the Latin version ready already.

I find this part really interesting... If I'm interpreting it correctly, it seems to say that, for legal reasons, the film's title is submitted to the state using the Latin alphabet. I'm guessing this had something to do with the colonial era under British rule but I'm not certain... it could also just be because English is one of their official languages,

Second reason is the audience. The Latin alphabet is used on posters in urban centres and multiplexes only, where the audience is multi-cultural, cosmopolitan and Devanagari might not register quickly in their eyes. So Latin alphabet is like a universal script when catering to such audiences.

Third reason is design. The workability in design software with the Latin script is easy and you have many typefaces (fonts) available in the Latin script. Not the same for Devanagari.

Lastly, posters put up in smaller towns and older single screen use the local language or the Devaganari script.

India is a huge country with 30 different languages spoken by at least a million people each... and they don't all use Devanagari script.

Some other supporting evidence... On Wikipedia, the film titles are only written in Latin lettering with an English translation.

In films/TV from other countries with non-Latin writing systems, the title is also included in the writing system native to that country.

All of the foreign films are in Wikipedia under their English titles with the native language title following it in the native alphabet and the Latin alphabet.

I think that, if the title was usually written in the Devanagari alphabet, these films would include the title in that alphabet in the Wikipedia articles... and what you might also notice is that Bollywood titles are generally in Hindi on Wikipedia.

There are some exceptions, if the film is really iconic and the title is regularly stated in English it will be listed under the English name, like Mother India and, actually in this case, they never translated the title into Hindi in the article but you can see the title in Devanagari on the poster. 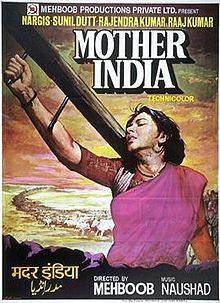 Not the answer you're looking for? Browse other questions tagged title indian-cinema .