Who recorded "The West Wing Theme"?

There are many sources saying it was composed by W. G. Snuffy Walden, but who actually recorded the version used in the show (both in the title sequence for every episode and occasionally within an episode)? Most recordings I see listed online are by the City Of Prague Philharmonic Orchestra, but since they all seem to be behind paywalls so I can't verify if they're the version used in the show.

From the down beat of "The West Wing" theme it's a magnificent build and, for me, a perfect prelude to the show. The pilot has a longer version?
Yes. For the pilot there was a 4 1/2-minute opening sequence that went into another 3 1/2-minute orchestral sequence. The first time I looked at it my jaw dropped. I went: "How are we going to do this?" Because in television you would never be able to get a budget for that size of orchestra. They said to me: "Why can't we do it?" "Because it cost too much money." And they said:" How do we go about doing it?" [Executive producer] John Wells asked in one meeting: "Why don't we get the Musicians Union to make a deal with us?" I started a conversation through orchestrators and union people I knew, because you couldn't do it directly. All of a sudden I realized that everybody was going "OK, let's see if we can." We actually pulled that off. That's how we managed to do the pilot. The Union made a special low-budget agreement with "West Wing" for the pilot and the first year on a trial basis. Which they have now ratified for all of television. It allowed us to go in four or five times [a season] with a big orchestra and score the show.

Where do you record the show's orchestral score?
At Warner Bros. [Burbank]. I go in with a scaled-down 50-piece orchestra and record pieces for different shows, and then fill in the rest with electronic devices. But it's deceiving. Once your ears hear the orchestra and the theme behind the main title - that big sweeping expanse of music - you're already buying it. But probably 65% of the score on "West Wing" is me playing electronics. I use that kind of a palate, because we have built up this incredible sample library.

There's also this little tidbit from Rob Lowe's Autobiography Stories I Only Tell My Friends: An Autobiography 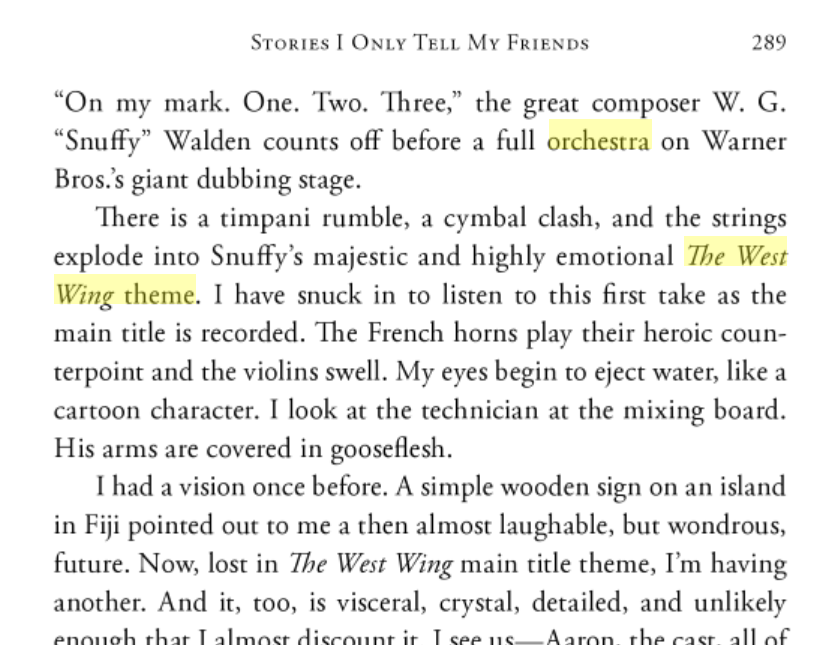 Not the answer you're looking for? Browse other questions tagged soundtrack the-west-wing .