Ask Question
Asked 4 years, 10 months ago
Active 4 years, 8 months ago
Viewed 709 times
6
votes
Closed. This question is off-topic. It is not currently accepting answers.
Closed 2 years ago.
Locked. This question and its answers are locked because the question is off-topic but has historical significance. It is not currently accepting new answers or interactions.

From a young age, early nineties, I've always remembered quite vividly a couple of scenes from what I 'think' was a movie (I was young so could have made it up although that's unlikely as it scared the crap out of me!)

A boy is in a room with candles which are all lit. I think he was dressed up in outdoor clothes such as a coat and hat. He sees a fairly old woman at the top of a set of stairs. A guy pops up behind her and strangles her (with a wire or something).

The boy runs into a car and locks himself in but the window of one side is open. Just as he begins to close it, the same guy runs up and sticks his head and arm inside. The window keeps going up (I guess it's electronic windows) and the glass begins to break.

It's in colour, seems and felt like a horror or thriller but could very well have been a comedy! I'm sure i saw it before 1994. I've had these images in my head for over 20 years wondering where it's from so hopefully the community can put my mind at ease.

The description reminds me maybe of Lady in White (1988).

There is a house full of candles. And there is a scene where the kid is in a car and the bad guy is trying to get him...I think it is maybe an automatic tailgate window that catches him. 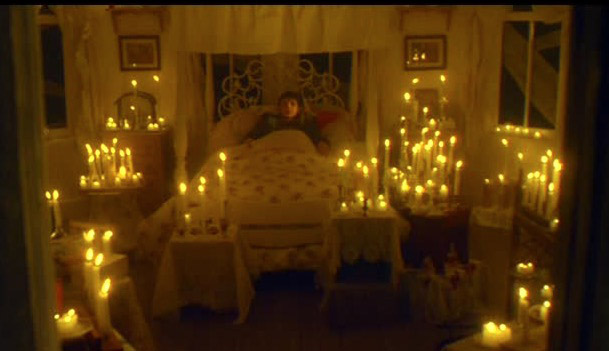